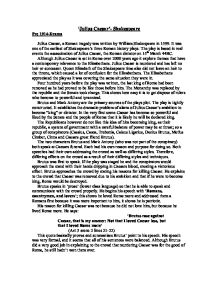 'Julius Caesar'- Shakespeare Pre 1914-Drama Julius Caesar, a Roman tragedy was written by William Shakespeare in 1599. It was one of the earliest of Shakespeare's three Roman history plays. The play is based in real events the assassination of Julius Caesar, the Roman dictator on 15th March 44BC. Although Julius Caesar is set in Rome over 2000 years ago it explore themes that have a contemporary relevance to the Elizabethans. Julius Caesar is murdered and has left no heir or successor. Queen Elizabeth of the Shakespeare time also did not leave an heir to the throne, which caused a lot of confusion for the Elizabethans. The Elizabethans appreciated the play as it was covering the same situation they were in. Four hundred years before the play was written, the last king of Rome had been removed as he had proved to be like those before him. The Monarchy was replaced by the republic and the Senate took charge. This shows how easy it is to get dispose of rulers who become to powerful and tyrannical. Brutus and Mark Antony are the primary sources of the plays plot. The play is tightly constructed. It establishes the dramatic problem of alarm of Julius Caesar's ambition to become "king" or dictator. In the very first scene Caesar has become so powerful and liked by the Senate and the people of Rome that it is likely he will be declared king. The Republicans however do not like this idea of him becoming king, as their republic, a system of government with a careful balance of power may be at threat; so a group of conspirators (Cassius, Casca, Trebonia, Caisus Ligarius, Decius Brutus, Metlus Cimber, Cinna and Caesars great friend Brutus). The two characters Brutus and Mark Antony (who was not part of the conspiracy) both speak at Caesars funeral. Each had his own reason and purpose for doing so. ...read more.

Caesar wanted nothing but the best for the people of Rome. Antony wants to show that Caesar was not ambitious by providing four reasons as evidence. These are: * He brought many prisoners whose ransoms filled the treasury. This makes the audience realise that what ever Caesar done was for Rome * When the poor cried Caesar wept in sympathy. This shows that Caesar was concerned about the citizens and the welfare of Rome, it also shows that Caesar was emotionally weak, but ambition should be made of sterner stuff. * When Caesar denied the crown three times. I f Caesar wanted to be come king and if he was ambitious, why didn't he take the crown at the feast? * The will Caesar left for the people. If Caesar was ambitious and greedy why did he leave the people of Rome 75 Drachmas and his private walks? Antony deals wit Caesars worst point, his desire to become king of Rome by making you believe he denied the crown three times at the feast of Lupercal because he had no desire to become king. The use of Caesars will as a stage prop arouses a lot of attention from the crowd. He tells the crowd about it but then deliberately changes to another point. By using this delaying tactic he keeps the crowds attention. He continuously prolongs them and builds up a climax. He also asks the crowds permission to read the will 'You compel me then to read the will?'- This technique makes the crowds think that he is a helpless man and he has no power over anything. It makes the crowds believe they are telling him what to do. After mentioning the will he tells the crowd to gather round Caesar's body. He uses Caesars body as a tool of manipulation. This creates a very dramatic effect as the crowd see what the mighty Caesar has been reduced to. ...read more.

How now fellow" (Lines 258-259) Antony does not care of the plebs. All he cares about is his success and his ability to avenge Caesars death. The crowds will burn down houses and kill people but he is not worried about that. Antony proves he has been successful when the crowds disperse to look for the conspirators; they come across a poet called Cinna. They kill him just because he bears the name 'Cinna' even though he has no contact with any of the conspirators. These shows how powerfully manipulating his speeches were. The crowds become brutal and blinded by this manipulation. "Revenge! About! Seek! Burn! Fire! Kill! Slay! Let not a traitor live." (Lines 202-203) Antony was successful in his aims to manipulate the crowds after the murder of Caesar. He had a hard task of making a speech to an unruly crowd who had been turned against Caesar by Brutus. He easily changed their way of thinking and succeeded in his plan. I have found that Brutus was honourable but was blinded by his love for Rome and was also easily persuaded by Cassius and the conspirators. He did not think of the consequences and though that the people of Rome would see through his eyes and believe that this was his true reason for killing Caesar. However, Antony was very manipulative and persuasive in changing thee views of the crowd easily. His repetition, positive adjectives, rhetorical questions, sarcasm and pauses all combined to have a very great impact on his speeches, which influenced the crowds. There is a contemporary relevance of Antonys' speeches to how modern politicians influence people to vote for them. Modern politicians promise to do the best for the people i.e. improve healthcare, schooling etc and also promise to right the mistakes of the past leaders. They use persuasive language and say the benefits the people will receive if they will cast their vote towards them. Antony used this technique and told the people of Rome what they had inherited from Caesar, but did they receive anything what Antony told them? ...read more.