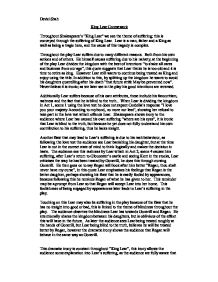 King Lear Coursework Throughout Shakespeare's "King Lear" we see the theme of suffering; this is conveyed through the suffering of King Lear. Lear is a man, father and a King as well as being a tragic hero, and the cause of this tragedy is complex. Throughout the play Lear suffers due to many different reasons. Both from his own actions and of others. He himself causes suffering due to his naivety, at the beginning of the play Lear divides the kingdom with the best of intentions "to shake all cares and business from our age", this quote suggests that Lear thinks he is too old and it is time to retire as king. However Lear still wants to continue being treated as King and enjoy using the title. In addition to this, by splitting up the kingdom he wants to avoid his daughters quarrelling after his death "that future strife May be prevented now". Nevertheless it is ironic; as we later see in the play his good intentions are reversed. Additionally Lear suffers because of his own attributes, these include his favouritism, rashness and the fact that he is blind to the truth.. ...read more.

Lear's suffering is also caused at the hands of his daughters Gonerill and Regan, after splitting the kingdom between the remaining daughters he directly hands over the power into Gonerill and Regan hands. They are then able to use it against Lear and consequently cause him suffering. The audience sees the majority of Lear's suffering due to his daughters in Act 2, scene 4 in which both sisters take away any power that Lear holds. The audience sees Lear's suffering directly as when Kent is put into the stocks, Lear questions this and criticises Gonerill's treatment towards him. The audience is shown the two sister's standing up against their father, "O sir, you are old", implying that he has lost most of his reason and due to this he is unable to make rational decisions. Another aspect of Lear's suffering caused by Regan and Gonerill is requesting Lear to reduce his followers, by doing this they are emphasising the repression of his power and that he no longer has the stature of being King. It is identified that the daughters clearly have taken power away from Lear, as Regan requests Lear to return to Gonerill's but on the condition that he must ...read more.

The audience is shown that Lear does not fully learn from his mistakes, but his values do change as he acknowledges some of his weaknesses "Pray you now, forget And forgive", this quote shows Lear begging for forgiveness from Cordelia, he becomes more caring and realises the mistakes he has made with Cordelia Lear would rather go with her in prison then become King again. Finally through his insight Lear emerges more humble, loving and sympathetic towards Cordelia. The structure of "King Lear" conveys suffering as in Act 1 and 2 the audience is shown Lear loosing power to his daughters Gonerill and Regan, which then causes him suffering at the hands of these daughters in Act 3 and also gives the audience insight into the onset of Lear's madness. Act 4 shows to the audience a change in the role of people who hold power and the final act shows a resolution, in which all the characters and different plots fold together. The structure shows to the audience the cause of Lear's suffering and finally how the suffering he has endured comes to an end. In conclusion Shakespeare successfully conveys to the audience the theme of suffering throughout "King Lear" caused to Lear both by himself and the cause of others. Devki Shah ...read more.