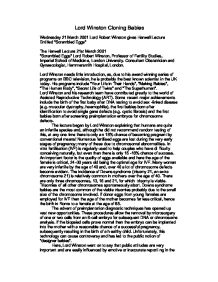 Many women are very infertile by the age of 40 and, over 40 a lot of chromosome defects become evident. The incidence of Downs syndrome (trisomy 21, an extra chromosome 21) is relatively common in mothers over the age of 40. There are only three chromosomes, 13, 18 and 21, for which trisomy is viable. Trisomies of all other chromosomes spontaneously abort. Downs syndrome babies are the most common of the viable trisomies probably due to the small size of the chromosome involved. If donor eggs from young females are employed for IVF then the age of the mother becomes far less critical, hence the birth in Rome to a female at the age of 65. The advent of preimplantation diagnostic techniques has opened up vast new opportunities. ...read more.

A new House of Lords Select Committee will examine the working of the Animals (Scientific Procedures) Act 1986 and he explained that all members of this committee were non-scientists. Lord Winston felt that this was probably a good thing as prejudice will be limited. He stressed the importance of the need to study gene function and how mutagenesis experiments such as those carried out at Harwell were critical in generating new mouse models of human genetic disorders. Lord Winston ended his fascinating lecture by talking about his role in the House of Lords and advised scientists that communication is all. He warned that scientists must improve communication with the general public or we will face a more difficult time in future years. The afternoon concluded with a buffet and drinks at which Lord Winston took the opportunity to chat to the many students from local schools that attended the lecture. ...read more.