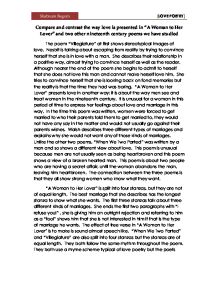 Compare and contrast the way love is presented in "A Woman to Her Lover" and two other nineteenth century poems we have studied The poem "Villegiature" at first shows stereotypical images of love. Nesbit is talking about escaping from reality by trying to convince herself that she is in love with a man. She describes their relationship in a positive way, almost trying to convince herself as well as the reader. Although nearer the end of the poem she begins to admit to herself that she does not love this man and cannot make herself love him. She tries to convince herself that she is looking back on fond memories but the reality is that the time they had was boring. "A Woman to Her Lover" presents love in another way: it is about the way men see and treat women in the nineteenth century. It is unusual for a woman in this period of time to express her feelings about love and marriage in this way. In the time this poem was written, women were forced to get married to who their parents told them to get married to, they would not have any say in the matter and would not usually go against their parents wishes. ...read more.

The effect of free verse in "A Woman to Her Lover" is to make is sound almost speech like. "When We Two Parted" and "Villegiature" are also split into four stanzas but the stanzas are of equal length. They both follow the same rhythm throughout the poem. They both use a rhyme scheme typical of love poetry but the poets present unusual love. The slow rhyme scheme is used because they are both recounting a memory from the past almost story like. "A Woman to Her Lover" builds up the first three paragraphs to the final forth when she is explaining how she wants love to be presented to her; "our co-equal love" ... "live and work. to love and die with you", this phrase contrasts almost like wedding vows. The storyline develops from her saying what she doesn't want in a marriage, to what she does want which is equality and love. In the poem "Villegiature" the storyline develops the opposite way: "Romeo's way. And through the blossom climbed and kissed me." After complimenting him on his romantic ways, she changes her view of him, "I did not love you" ... "Oh dear!" ...read more.

Nesbit does not use many poetic techniques in "Villegiature". However she does use a metaphor to represent a thing of the past: "ghost" is used to describe her lover in a memory where he would climb up to her window, although she refers to him with something that is usually associated with a negative connection. All three poems presented love in a different way. "A Woman to Her Lover" shows the most interesting way love is presented as it is the most honest. Walsh talks about how different people can view love and also how she would want love to be. "Villegiature" presents sort of "fake" love where there is no love for her to the man but Nesbit is trying to convince herself there is even though the only love there is the unreturned love from the man to the woman. "When We Two Parted" shows a sad way of how love that ends in heartbreak. It is also an honest poem as it shows love can grow and then fade away. ?? ?? ?? ?? Shabnam Begum [LOVE POETRY] ...read more.