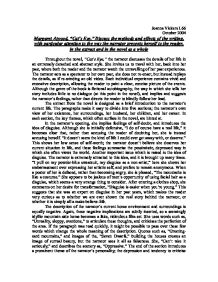 Joanna Vickers L66 October 2004 Margaret Atwood, "Cat's Eye," Discuss the methods and effects of the writing, with particular attention to the way the narrator presents herself to the reader, in the extract and in the novel as a whole Throughout the novel, "Cat's Eye," the narrator discusses the details of her life in an extremely detached and abstract style. She invites us to travel with her, back into her past, where both the reader and the narrator watch the unravelling of her past experiences. The narrator acts as a spectator to her own past, she does not re-enact, but instead replays the details, as if re-winding an old video. Each individual experience contains vivid and evocative description, allowing the reader to paint a clear, concise picture of the events. Although the genre of the book is fictional autobiography, the way in which she tells her story includes little to no dialogue (at this point in the novel), and implies and suggests the narrator's feelings, rather than directs the reader to blindly follow her lead. The extract from the novel is designed as a brief introduction to the narrator's current life. ...read more.

Again, these negative implications are subtly inserted, so a seemingly idyllic mountain-side home becomes a fake, ridiculous film set. She uses words such as, "Unreality, sloppy, overdone," to articulate these thoughts, and criticises the perfection of the area. If the paragraph was read quickly, it might be possible to pass over these few words which change the whole meaning of the description. Quotes such as, "Greeting-card mountains," and images of the, "Seven Dwarfs," building the houses creates an image of surreal beauty, but the narrator sees it all as falseness. She, "Can't take it seriously," and describes the scenery as, "Oppressive." The end of the section introduces a prominent theme of the narrator's personality; the depression and tendency to criticise which forms a dark shadow over almost all of her past and present experiences thus far in the novel. Unusually, she later attempts to put these emotions into words, "There are days when I can hardly make it out of bed. I find it an effort to speak." She tells us how she relies on individual steps, such as taking the cap off the toothpaste, in order to function at all. ...read more.

She claims that the word artist, "Embarrasses," her, as though it were a crime. The narrator refuses to define herself as an artist, "I prefer painter, because it's more like a valid job." Just as she is glad of her husband's normal job, she feels that is unsuitable for her to choose a career simply because she enjoys it; it must be a socially accepted and normal. The final line of the extract ends with, "I have had a narrow escape." This is an extremely provocative sentence; it gives us no information as to the subject of her escape, and so incites the powerful sense of mystery that is central to the novel. The narrator often ends chapters or paragraphs with short sentences with unclear meanings, which fuels the reader's curiosity, since they appear to hint at deeper insights into the narrator's psyche. After describing her family, she ends abruptly with the line, "Such are my pictures of the dead," this is a good example of the shock which she seems to enjoy inflicting upon the reader. As she tells us her story, the narrator acts as a self-confessed, "Disembodied voice," and we experience her memories as clearly as if we were there, and, with the emotive descriptions, it is not hard to believe we are. ...read more.