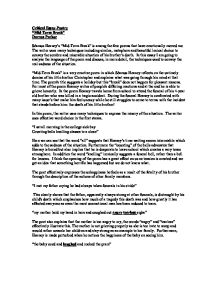 Critical Essay-Poetry "Mid-Term Break" Darren Parker S�amus Heaney's "Mid-Term Break" is among the few poems that have emotionally moved me. The writer uses many techniques including similes, metaphors and beautiful lexical choice to convey the sombre and miserable situation of his brother's death. In this essay I am going to analyse the language of the poem and discuss, in more detail, the techniques used to convey the real sadness of the situation. "Mid-Term Break" is a very emotive poem in which S�amus Heaney reflects on the untimely demise of his little brother Christopher and explains what was going through his mind at that time. The poem's title suggests a holiday but this "break" does not happen for pleasant reasons. For most of the poem Heaney writes of people's differing reactions and at the end he is able to grieve honestly. In the poem Heaney travels home from school to attend the funeral of his 4-year old brother who was killed in a tragic accident. During the funeral Heaney is confronted with many issue's that make him feel uneasy while he still struggles to come to terms with the incident that stands before him: the death of his little brother! In this poem, the writer uses many techniques to express the misery of the situation. The writer uses effective word choice in the first stanza. "I sat all morning in the college sick bay Counting bells knelling classes to a close" Here we can see that the word "all" suggests that Heaney's time waiting seems intermiable which adds to the sadness of the situation. ...read more.

The emotion of embarrassment is unusual for a young boy of Heaney's age to experience at this time for his brother has just died and most people would be depressed and miserable. In addition, in a very hushed atmosphere, Heaney noticed that strangers were whispering about him which must have made him felt very uncomfortable. "the ambulance arrived with the corpse" When the day has passed and night falls, the child's body is returned home however, Heaney sees this as a "corpse" and not a person. This therefore proves that Heaney has not come to terms yet with the fact that he has lost his brother forever which emphasises how heartbreaking the situation was. I think that the poet has been very effective here as he has efficiently elucidated how he felt in the company of the people who attended his brother's funeral. The writer uses an enjambment which has great effect on us. Furthermore the writer uses cold and clinical lexical choice which illustrate that he is not yet come to terms with his brother's death. The poet uses the word "corpse" which gives us connotations of an object rather than a person- he feels that he is just a body which is very unemotive. This adds pathos to the situation, it illustrates how overwhelmingly sad the situation must have been for Heaney as he feels numb inside; unable to let out his emotions. ...read more.

During the poem we notice that Heaney's development of grief improves dramatically. For most of the poem Heaney describes the funeral as it were a report; he uses specific times, clinical terms and unemotive language however when Heaney is finally alone with his brother he starts to grip reality and portray his brother as a person rather than just a body. Heaney then narrates the poem with emotive language, personal pronouns and less specific times...he writes naturally. I believe that Heaney employed many effective techniques in this poem and as a result successfully conveyed the sadness and misery of losing a loved one. I particularly was moved when he used a simile to describe his brother as sleeping rather than dead; it portrayed his brother as an innocent little boy. Moreover, when he created a soft image of a hideous scar I was touched as he obviously loved his brother to a great extent. I sympathise with Heaney to a great length as it is a tragic loss to lose a family member especially if it is someone you are exceptionally close to like a brother or sister. This poem has revealed to me the true significance of life and also the unimaginable pain of death. This poem has made me realise that you do not properly appreciate something until it is gone. In light of this I have learned that you should always respect and treat one another well as you never know when their time will come! "Mid-Term Break Critical Evaluation" Darren Parker 15/12/05 Word Count = 1847 ...read more.