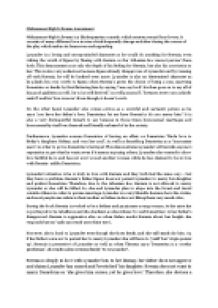 Midsummer Nights Dream is a Shakespearian comedy, which centres around four lovers.

﻿Midsummer Night?s Dream Assessment Midsummer Night?s Dream is a Shakespearian comedy, which centres around four lovers. It consists of many different love stories which frequently change and alter during the course of the play which makes its humorous and appealing. Lysander is a loving and strong-minded character as he would do anything for Hermia, even risking the wrath of Egeus by fleeing with Hermia so the ?Athenian law cannot pursue? them both. This demonstrates not only the depth of his feeling for Hermia, but also his conviction to her. This is also very audacious because Egeus already disapproves of Lysander and by running off with Hermia, he will be loathed even more. ...read more.

As well as describing Demetrius as a ?inconstant man?, in order to prove Demetrius's betrayal. This demonstrates Lysander will tarnish anyone?s reputation to get what he wants even if it means exposing others. Lysander also wanted to show how faithful he is and has not ever wooed another woman while he has claimed to be in love with Hermia- unlike Demetrius. Lysander?s situation is he is truly in love with Hermia and they both feel the same way ? but they have a problem. Hermia?s father Egeus does not permit Lysander to marry his daughter and prefers Demetrius. Therefore, due to the Athenian law, Hermia is not allowed to marry Lysander or she will be killed. ...read more.

Hermia is protective of Lysander as well, as when Theseus says: ?Demetrius is a worthy gentleman?, she replies almost immediately ?So is Lysander?. Hermia is deeply in love with Lysander but, to her dismay, her father does not approve and claims Lysander has coaxed and ?bewitched? his daughter. Hermia does not want to marry Demetrius so ?she gives him curses, yet he gives love?. Therefore, she devises a plan for her and Lysander to escape the Athenian law. Due to his sweet gestures, loyalty and charm Lysander is my favorite male character. For example, he has ?interchanged love tokens? with Hermia, ?given her rhymes? and sung ?at her window? in the ?moonlight?. Also, whenever Lysander mentions his lover, he is always complimenting and declaring his love for ?beauteous Hermia? which portrays him to be a hopeless romantic devoutly in love. ...read more.