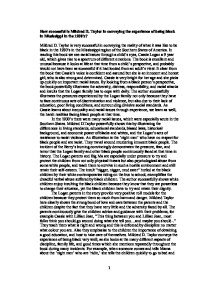 Mildred D. Taylor is very successful in conveying the reality of what it was like to be black in the 1930's in the Mississippi region of the Southern States of America. In reading this book we see racial issues through a child's eyes, Cassie Logan

How successful is Mildred D. Taylor in conveying the experience of being black in Mississippi in the 1930's? Mildred D. Taylor is very successful in conveying the reality of what it was like to be black in the 1930's in the Mississippi region of the Southern States of America. In reading this book we see racial issues through a child's eyes, Cassie Logan a 9 year old, which gives rise to a spectrum of different emotions. The book is excellent and unusual because it looks at life at that time from a child's perspective, and probably would not have been as successful if it had looked from an adult's view. It clear from the book that Cassie's voice is confident and assured but she is an innocent and honest girl, who is also strong and determined. Cassie is very bright for her age and she picks up quickly on important racial issues. By looking from a black person's perspective, the book powerfully illustrates the adversity, distress, responsibility, and racial attacks and insults that the Logan family has to cope with daily. The author successfully illustrates the pressures experienced by the Logan family not only because they have to face continuous acts of discrimination and violence, but also due to their lack of education, poor living conditions, and surrounding divisive social standards. As Cassie learns about inequality and racial issues through experience, we learn as well, the harsh realities facing black people at that time. In the 1930's there were many racial issues, which were especially acute in the Southern States. Mildred D.Taylor powerfully shows this by illustrating the differences in living standards, educational standards, biased laws, historical background, and economic power of blacks and whites, and the Logan's acts of resistance to r****t violence. An illustration is the 'night men' who have no respect for black people and are r****t. They travel around murdering innocent black people. ...read more.

They do not live on credit and they do not need to go to the Wallace store, which is owned by white people who control black people by debt. This means that they have more economic power and wealth than the sharecroppers. "You were born blessed, boy, with land of your own." By contrast most of the sharecroppers live on credit, never have any spare cash, are threatened, and have no choice but to go to the Wallace store. Another part of the Logan's historical background is the story telling tradition, which is carried on through the generations of the family. "Papa Luke and Mama Rachel were born right here in Mississippi. But their grandparents were born in Africa. The people who needed slaves to work in their fields and the people who were making money bringing slaves from Africa preached that black people weren't really people like white people were, so slavery was all right." The parents tell the children of their adventures and black slave history, and then the children tell their children and the stories and history is passed down, generation by generation. Mildred D.Taylor reinforces the realism of Cassie's story very successfully, by showing that some black people are not always good, for example T.J. who stole a pearl-handled pistol from the Barnett's store, whilst other black people have negative attitudes. Miss Crocker's attitude to white people is for example subservient. She takes the view that white people have authority and black people cannot do anything about it, so they should just follow the rules and do what ever they are told irrespective of whether it is right or wrong. Also she considers the black children at her school to be fortunate and they should be grateful to get anything from white people (such as discarded school books). "Well I just think your just spoiling those children, Mary. They've got to learn how things are sometime." ...read more.

So the boycott of the Wallace store failed. Mildred D.Taylor conveys the dreadful experience of being black here very well, and successfully shows the intractable struggles that the sharecroppers have to get themselves out of the cycle of debt. The author shows the difficulties the Logan's have in trying to help the sharecroppers overcome their problems and to stop this exploitation. Mildred D.Taylor convincingly shows the repeated intimidation and threats that black people had to endure at this time. For example, the Logan family are threatened by Harlan Granger, because he tells them that he backs the Wallace store and if the Logan's boycott the Wallaces bussiness then he will loose money. He therefore threatens the Logan's by saying to them that if they don't stop shopping at Vicksburg and stop buying things for the sharecropping family's then he will take their only form of wealth from them, their land. "But y'all keep on playing Santa Claus and I'm gonna get it back-real easy. You ready to lose your land, David, because of this thing?" The author shows this is a very serious threat because land is the Logan's only means of retaining some form of economic independence. In conclusion I think Mildred D.Taylor successfully conveys the experience of being black in the Mississippi during the 1930's. She reveals to the reader the daily distress of coping with extreme poverty, r****m and injustice. She is particularly effective in describing the mental torment and violence meted out to black people at this time. The fact that the book is written from a child's perspective takes the reader to a different dimension in that some black people in authority over the child seek to justify the unfairness of a white r****t society when there is no moral justification for doing so. By acting in this way they inadvertently become part of the unjust system and act as submissive role models for children. By contrast, some black people provide very positive role models and show that in all people there is a thirst for justice. ?? ?? ?? ?? 6 1 ...read more.