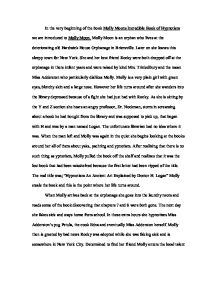 In the very beginning of the book Molly Moons Incredible Book of Hypnotism we are introduced to Molly Moon. Molly Moon is an orphan who lives at the deteriorating old Hardwick House Orphanage in Briersville. Later on she leaves this sleepy town for New York. She and her best friend Rocky were both dropped off at the orphanage in there infant years and were raised by kind Mrs. Trinkelbury and the mean Miss Adderston who particularly dislikes Molly. Molly is a very plain girl with green eyes, blotchy skin and a large nose. However her life turns around after she wanders into the library depressed because of a fight she had just had with Rocky. As she is sitting by the Y and Z section she hears an angry professor, Dr. Nockman, storm in screaming about a book he had bought from the library and was supposed to pick up, that began with H and was by a man named Logan. The unfortunate librarian had no idea where it was. ...read more.

After collecting the prize money of 3,000 pounds she heads to the airport and buys a ticket to New York leaving the orphanage far behind. However she has no idea that her secret was discovered by Mr. Nockman. When he discovered she was the winner of the talent show, had popped out of no where, and had been spotted at the old magic shop, his true colors of a crook come out and he follows her and Petula to New York. When Molly arrives in New York she goes to an exspensive hotel and enjoys the luxuries of it until she realizes with a start that her money is almost gone and she needs to earn some money fast. She goes to a famous agency and hypnotizes the owner into putting her in a broad way musical called Stars On Mars stealing the part from another girl. She hypnotizes the audiences when performing to love the act. With the money issue gone she goes back to the important part, enjoying her life. ...read more.

After bringing all the jewels to the warehouse and loading them into a stolen van, they collected Petula and waited while Nockman drove off. They were hoping for one thing that if a radio had a tape in it the tape would automatically play first. Thankfully there prayer was answered and hour's later Mr. Nockman drove up to the warehouse hypnotized. Molly and Rocky had recorded a short radio show the night before with there hypnotism on full blast and ordered Nockman to turn around and come back to where they were. After giving the police a hint to where the jewels were Molly, Rocky and Mr. Nockman returned to the orphanage to find it in shambles with all the children a mess and hungry. Molly learned that Miss Adderston and Edna had both left the children thinking they would be happier that way. Molly quickly calls Miss Trinkelbury who had been fired and begs her to come back, she at once agrees. She then sets to cleaning the whole orphanage, feeding all the kids and finally restoring the orphanage to a place of happiness. ...read more.