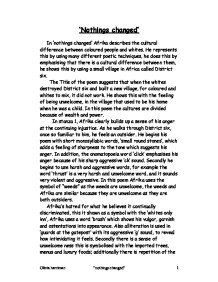 'Nothings changed' In 'nothings changed' Afrika describes the cultural difference between coloured people and whites. He represents this by using many different poetic techniques, he does this by emphasising that there is a cultural difference between them, he shows this by using a small village in Africa called District six. The Title of the poem suggests that when the whites destroyed District six and built a new village, for coloured and whites to mix, it did not work. He shows this with the feeling of being unwelcome, in the village that used to be his home when he was a child. In this poem the cultures are divided because of wealth and power. In stanza 1, Afrika clearly builds up a sense of his anger at the continuing injustice. ...read more.

In this poem Afrika uses the symbol of "weeds" as the weeds are unwelcome, the weeds and Afrika are similar because they are unwelcome as they are both outsiders. Afrika's hatred for what he believes it continually discriminated, this it shown as a symbol with the 'whites only inn', Afrika uses a word 'brash' which shows his vulgar, garnish and ostentations into appearance. Also alliteration is used in 'guards at the gatepost' with its aggressive 'g' sound, to reveal how intimidating it feels. Secondly there is a sense of unwelcome ness this is symbolised with the imported trees, menus and luxury foods; additionally there is repetition of the word 'glass' this symbolises a barrier physical and psychological as he is not allowed in. ...read more.

Additionally Afrika avoids imagery and descriptive language, when he describes the 'working mans cafe'. He juxtaposes the wealthy but artificial restaurant with a very basic caf�. In the poem 'nothings changed' there is a sense of injustice in this poem. In one stanza he repeats the word mean, this is in the last stanza, and this word means evil, malicious and vicious. Also in the last stanza there is the word 'burn' it is another symbol for the anger inside him this is shown earlier in the poem. This poem implies that there is equality between the coloured and white cultures, that there is a sense of injustice, he shows that we are unequal by wealth and power. Also in this poem it shows that nothing has changed to change the unfairness between the two cultures the coloured people and the whites. ?? ?? ?? ?? Olivia harriman "nothings changed" 1 ...read more.