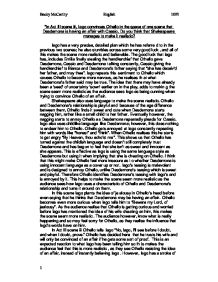 "In Act III scene iii, Iago convinces Othello in the space of one scene that Desdemona is having an affair with Cassio. Do you think that Shakespeare manages to make it realistic? Iago has a very precise, detailed plan which he has referred to in the previous two scenes; he also stumbles across some very good luck, and all of this makes the scene more realistic and believable. The good luck that Iago has, includes Emilia finally stealing the handkerchief that Othello gave Desdemona, Cassio and Desdemona talking constantly, Cassio giving the handkerchief to Bianca and Desdemona's father saying that "she has deceiv'd her father, and may thee". Iago repeats this sentiment to Othello which causes Othello to become more nervous, as he realises that what Desdemona's father said may be true. The idea that there may have already been a 'seed' of uncertainty 'sown' earlier on in the play, adds to making the scene seem more realistic as the audience sees Iago as being cunning when trying to convince Othello of an affair. Shakespeare also uses language to make the scene realistic. Othello and Desdemona's relationship is playful and because of the age difference between them, Othello finds it sweet and cute when Desdemona starts nagging him, rather like a small child to her father. Eventually however, the nagging starts to annoy Othello as Desdemona repeatedly pleads for Cassio. Iago also uses childlike language like Desdemona; however, this does nothing to endear him to Othello. ...read more.

Now that Othello and Desdemona are married, she could be feeling less of the danger and more safe. By having an affair with Cassio she has got the element of danger back. This makes the scene seem more realistic because the audience already knows that Othello has insecurities, and we can see Iago playing on those insecurities, in order to convince Othello of an affair. Iago also mentions that he is worried that if he tells Othello what he thinks is going on, and then he will lose his reputation and be ruined like Cassio, whilst Othello will not gain anything from it. "But he filches from me my good name, Robs me of that, which not enriches him, and makes me poor indeed." This is effective as it makes Othello feels that Iago is trying to be his friend and look out for him but is worried about how they will both turn out at the end. Othello becomes more curious and this makes the scene seem more effective because the audience sees Othello trying to find out what is going on and having suspicions that it is not good because of Iago's reluctance. Othello has previously told Othello "when I doubt, prove." Othello now clearly doubts that Desdemona loves him "Why did I marry?" and so Iago realises that he will need some sort of proof to make Othello fully believe that Desdemona and Cassio are having an affair. Here Iago has a stroke of luck. ...read more.

At this point in the scene, now that Othello is convinced that his wife is committing adultery, Othello and Iago seem to change places. Othello uses the same language as Iago used. Othello calls Desdemona a "lewd minx" and a "fair devil". Using animal imagery shows us that he believes Iago and doesn't trust Desdemona anymore. Othello probably finds it easier to use animal imagery as he still loves Desdemona and this probably distances him from her. Iago starts giving Othello orders "Do not rise yet", as he probably realises that Othello now believes him and he can get away with it. Iago makes a vow to seek vengeance against Desdemona and Cassio and Othello asks him to let him know "That Cassio's not alive." Iago replies "My friend is dead" meaning 'It is done'. I think that this scene seems realistic as Iago is very clever and cunning in his planning. He first plants the suspicion in Othello's mind, then tells him what he believes, plays on his insecurities and gives him 'proof' yet still manages to sound like he doesn't want to tell Othello and so Othello believes that he is a true friend and is trying to protect him. Also in real life people are quick to believe what newspapers and tabloids tell us and if our own friends told us something similar we wouldn't instantly dismiss the thought if we trusted them because we'd believe that they were trying to protect us. In conclusion I think that Shakespeare manages to make this scene seem very realistic with his use of language and imagery in Othello's mind. ?? ?? ?? ?? Becky McCarthy English 10PI 1 ...read more.