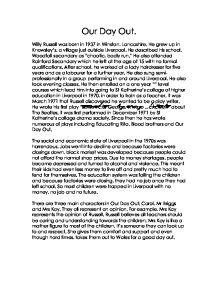 Our Day Out Analysis

Our Day Out. Willy Russell was born in 1937 in Winston, Lancashire. He grew up in Knowsley's, a village just outside Liverpool. He described his school, Woodfall secondary as "chaotic, badly run." He also attended Rainford Secondary which he left at the age of 15 with no formal qualifications. After school, he worked at a lady hairdresser for five years and as a labourer for a further year. He also sung semi-professionally in a group performing in and around Liverpool. He also took evening classes. He then enrolled on a one year "" level courses which lead him into going to St Katherine's collage of higher education in Liverpool in 1970, in order to train as a teacher. It was March 1971 that Russell discovered he wanted to be a play writer. He wrote his first play "John, Paul, George, Ringo ...and Bert" about The Beatles. It was first performed in December 1971 by St Katherine's collage drama society. Since then he has wrote numerous of plays including Educating Rita, Blood brothers and Our Day Out. ...read more.

Mr Briggs is everything Russell is against. Briggs is cruel towards the children, and makes them feel beneath him by punishing them. Briggs thinks children need to be taught through discipline and unnecessary punishment. Russell is against this as the children have more things to worry about then learning how to stand in a straight line. These were hard times in Liverpool, and Briggs could only think about expectations and skills he benefited from. Carol is the voice of the children. She shows us how they feel. Through carols character we can see they are vulnerable and helpless, no bright future and probably problems back at home. Carol shocks us when she is on the verge of suicide. It makes us feel sympathy and sorry for the children. they probably wont be able to live in them big houses Carol talks about with all the trees and plants right near the sea. The day out is a very eventful one. At first there's the bus journey. The children are all excited because most of them have never left Liverpool. ...read more.

He believes how the children are acting is unacceptable and the whole trip is an "ill organized affair" when infact the trip was organized to give the children freedom. Mrs Kay decides to treat the children by taking them to the beach. Carol runs off to the cliff and this is where we really get to know her. She doesn't want to leave Wales and considers jumping off the cliff because she doesn't want to go back to Liverpool. During this scene we see a different side to Briggs. He listens to Carol and he makes us believe he does actually care. He gives her kind words of advice & helps her from doing something she would regret. At the end of the play we are back in Liverpool. We see Briggs dispose of the film from a camera. This film contains pictures of him having fun and interacting with the children. This shows that nothing has changed and the day out has been pretty pointless. The children return back to the streets of Liverpool with nothing but memories of their day out. By Danielle Jones ...read more.