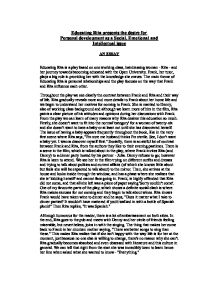 Personal development as a Social, Emotional and Intellectual issue

Educating Rita presents the desire for Personal development as a Social, Emotional and Intellectual issue AN ESSAY Educating Rita is a play based on one working class, hairdressing woman - Rita - and her journey towards becoming educated with the Open University. Frank, her tutor, plays a big role in providing her with the knowledge she craves. The main theme of Educating Rita is personal relationships and the play focuses on the way that Frank and Rita influence each other. Throughout the play we see clearly the contrast between Frank and Rita and their way of life. Rita gradually reveals more and more details to Frank about her home life and we begin to understand her motives for coming to Frank. She is married to Denny, also of working class background and although we learn more of him in the film, Rita paints a clear picture of his attitudes and opinions during her discussions with Frank. From the play we can learn of many reasons why Rita desires this education so much. Firstly, she doesn't want to fit into the normal 'category' for a woman of twenty-six and she doesn't want to have a baby or at least not until she has discovered herself. ...read more.

The thing that makes her come back to Frank is her drunken mother saying, "There are better songs to sing than these." This makes Rita realise that if she isn't happy with the way life is for her at the moment, just because no one else is willing to change, there's no reason why she can't. Rita gradually becomes absorbed and even obsessed with literature and this culture in general. We can tell that right from the start she was incredibly keen to learn hence her line when asked what she wanted to know - "Everything." Emotionally, Rita comes across as a very passionate and vibrant person. We know Frank feels this way too as, in scene 8, he is trying to hold back from teaching as much because she is so individual, he doesn't want her to turn into just another student. Right in the beginning, when Denny discovers she is on the pill, he burns all her books. We see clearly her devastation in the film, and we can also catch hints of it when she speaks to Frank. I think her desire to be educated is a definite emotional issue, as it takes a lot of guts and courage to break through the 'boundaries' of her class. ...read more.

This explains her lines, "If I pack the course in, I'll send it to y'" (the books Frank has given her) and when asked why she would do that, she replies "I just might. I might decide it was a soft idea." The words of some of her piers seem to have sunk in and are playing in the back of her mind even thought she has made her choice to become educated. Denny, who is perhaps her social equal - but not intellectual, wants her to have a baby and settle down and doesn't see a need for her to move on. He tells Rita she'd betrayed him and he tries to drag her down and prevent her from moving on. Finally, He gives Rita an almost ultimatum saying wither she packs in the course or gets out - she leaves him. When Rita started out on the course, her and Frank were on completely different intellectual levels and understanding but in the final scene we can see how they have both changed, emotionally, intellectually and socially. I am indecisive whether this is a change for the better or the worse but it is clear to see how a bit of the other has rubbed of on each of them. Rowan Yemm 10F1 English EducatingRita/Ro.doc ...read more.