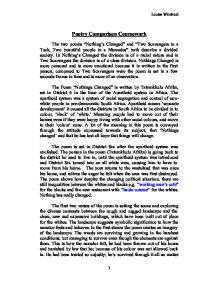 Please don't use the computer will be back soon

Poetry Comparison Coursework The two poems "Nothing's Changed" and "Two Scavengers in a Tuck, Two beautiful people in a Mercedes" both describe a divided society. In Nothing's Changed the division is of a racial nature and in Two Scavengers the division is of a class division. Nothings Changed is more personal and is more emotional because it is written in the first person, compared to Two Scavengers were the poem is set in a few seconds frozen in time and is more of an observation. The Poem "Nothings Changed" is written by Tatamkhulu Afrika, set in District 6 in the time of the Apartheid system in Africa. The apartheid system was a system of racial segregation and control of non-white people in pre-democratic South Africa. Apartheid means 'separate development' it caused all the districts in South Africa to be divided in to colour, 'black' of 'white.' ...read more.

Nothing has really changed. The first two verses of the poem is setting the scene and exploring the diverse contrasts between the rough and rugged landscape and the clean, new and expensive buildings, which have been built out of place for the whites. The landscape suggests symbolic significance to how the narrator feels and behaves. In the first stanza the poem creates an imagery of the landscape. The weeds are surviving and growing in the harshest conditions; but managing to survive even though the elements are against them. This is how the narrator felt, he had been thrown out of his home and banished by law that he; because of his colour was not allowed back in. He had been treated so unjustly; he's survived through it all no matter what has happened to him; just like the weed. Also the weeds are "trodden on," which is how he feels. ...read more.

However the next stanza says that "No board says it is:" This is meant to be ironic because there is no notice. It is written like this because it suggests; that the narrator knew it was for the whites only as clearly as if there was a sign there. Even though times have changed and there is no sign, saying so anymore. But the prejudice is still there, that won't go away. So he, as a black is still not "allowed in" The narrator states that he can sense that he is not welcome what ever the law states. "but my feet know, and my hands...." At the end of this verse, the reader see's the first part showing just how angry the narrator is; how is anger is "hot, white, inwards turning" his anger is towards all the white people, but because he can't express it, it's inward turning. His anger is so strong that it's white hot, and its white because its against all the white people. The anger is stressed using enjambment ?? ?? ?? ?? Louisa Wimbush 1 ...read more.