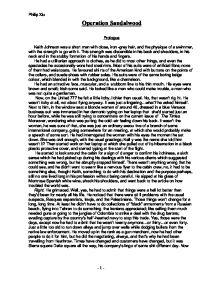 Prologue - Keith Johnson was a short man with close, iron-grey hair, and the physique of a swimmer, with the strength to go with it. This strength was discernible in his back and shoulders, in his neck and in the stubby formation of his hands and fingers.

Operation Sandalwood Prologue Keith Johnson was a short man with close, iron-grey hair, and the physique of a swimmer, with the strength to go with it. This strength was discernible in his back and shoulders, in his neck and in the stubby formation of his hands and fingers. He had a utilitarian approach to clothes, as he did to most other things, and even the spectacles he occasionally wore had steel rims. Most of his suits were of artificial fibre; none of them had waistcoats. He favoured shirts of the American kind with buttons on the points of the collars, and suede shoes with rubber soles. His suits were of the same boring beige colour, which blended in with the background, like a chameleon. He had an attractive face, muscular, and a stubborn line to his thin mouth. His eyes were brown and small; Irish some said. He looked like a man who could make trouble, a man who was not quite a gentleman. Now, on the United 777 he felt a little itchy, itchier than usual. No, that wasn't right. He wasn't itchy at all, not about flying anyway. It was just a lingering...what? he asked himself. Next to him, in the window seat a blonde woman of around 40, dressed in a blue Versace business suit was immersed in her demonic typing on her laptop that she'd started just an hour before, while he was still trying to concentrate on the current issue of The Times. Moreover, wondering what was putting the cold-air feeling down his back. It wasn't the woman, he was sure of that, she was just an ordinary executive of a branch of some international company, going somewhere for an meeting, at which she would probably make a speech of some sort. He had interrogated the woman with his eyes the moment he sat down. She was civil enough, with the usual greetings; Kelly was the name she told him wasn't it? ...read more.

"We don't have an exact location on him at the moment, but however, we think he is located at the La Belle quarter. We will have to rely upon Richard's contact, however dodgy they may be to get us the address of his Paris house," Answered Jane seriously, "What type of operation is this?" asked Steve again. "This operation will be denied upon capture by the DoD and the British government respectively," Jane looked around at the sullen looks of her colleagues. " And since we are on relatively good terms with the French Government, it would make sense to keep the mission on as low as a profile as possible, that means a quick in and out mission, with a low profile killing preferably in the target's room. Any more questions? Good, you will travel light, and weapons will be issued upon arrival in the safe house in Paris. Tickets have already been arranged for the night flight to Paris and get a few hours sleep while you can. " Harsh tactics The British Airways 737 roared onto the runway of De Gaulle airport, where promptly Mark and the team members left and walked to the customs area. The fact that they had nothing to declare and their small baggage, made the transition much easier. For this mission they were wearing dark casual clothes to blend in with the background. As the team rolled out towards the safe house in the hired mini-van from the airport they went past some of the world's best views, but the team's mind was on a different matter altogether. The safe house was located in the Latin Quarter, in a one-floored terraced house, built about the time when the industrial revolution was taking hold in France. When Jane unlocked the door, and went in with the rest of the team following in 5 minutes intervals as to not arouse suspicion. ...read more.

Sykes, immediately caught on to what was happening, and of course wanted Keith to be removed with the whole of SIS section so that no evidence is left of his activities. So he sent you lot in to kill Keith, while under the charade that I sent it. A very clever plot, but of course, Keith knew something was amiss and took the precaution of hiring extra guards and a helicopter. Sykes knew that if any of you was alive after the end, he would dish out the security leak thing until he stood in long enough in the office to get what he wanted. That is the God's truth and all that I know." "But if Keith was an arms merchant, how could you be friends with him?" Asked Mark. "Simple, I deliver mostly faulty weapons, and they pay me in cash, so I disappear, and then resurface and give the money mostly to Bedwell to spend on his troops, while I keep some, for mine own personal use. And so while I fund an unit of peacekeepers, I rip off the enemies of this countries." "So you still thinking of shooting me?" asked Bedwell "No, but we have to capture Sykes, to bring him to justice, and revenge for the death of a team member." Said Mark with defiance. "Too late old boy, the little blighter was seen in Heathrow bound for Brazil, just after you came galloping off to pop the old man." Said Bedwell with a tinge of irony. "But, don't worry, Sykes or what ever his real name is, is never going to set foot on this country again while I am the head of SIS." "What? You coming back? To run the outfit again?" asked Mark with shock. "Of course, who else would I trust? And my first decision is to find a replacement for the missing place in Team 2," then Bedwell asked, "so, Mark who do you suggest?" -THE END- Philip Xiu - 1 - ...read more.