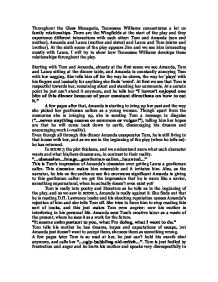 Relationships in The Glass Menagerie, by Tennessee Williams.

Throughout the Glass Menagerie, Tennessee Williams concentrates a lot on family relationships. There are the Wingfields at the start of the play and they experience different interactions with each other: Tom and Amanda (son and mother), Amanda and Laura (mother and sister) and Laura and Tom (sister and brother). At the sixth scene of the play appears Jim and we see him interacting mostly with Laura. I will try to show how Tennessee Williams develops these relationships throughout the play. Starting with Tom and Amanda, already at the first scene we see Amanda, Tom and Laura sitting at the dinner table, and Amanda is constantly annoying Tom with her nagging. She tells him off for the way he chews, the way he 'plays' with his fingers and basically for anything she finds 'weird'. At first we see that Tom is respectful towards her, remaining silent and standing her comments. At a certain point he just can't stand it anymore, and he tells her "I haven't enjoyed one bite of this dinner because of your constant directions on how to eat it." A few pages after that, Amanda is starting to bring up her past and the way she picked her gentleman callers as a young woman. Though apart from the memories she is bringing up, she is sending Tom a message in disguise ("...never anything coarse or common or vulgar!"), telling him her hopes are that he will come back down to earth, discouraging his dreams and encouraging work (=reality). Even though all through this dinner Amanda exasperates Tom, he is still living in that house with her, and as we see in the beginning of the play (when he tells us)- he has returned. In SCENE 3 the plot thickens, and we understand more what each character wants and what his/hers dreams are, in contrast to their reality. "...obsession...image...gentleman caller...haunted..." This is Tom's impression of Amanda's obsession over getting Laura a gentleman caller. This obsession makes him miserable and it irritates him. ...read more.

Amanda's reaction is: "Fuss, fuss-silliness! Over a gentleman caller!" This is probably the most ironic statement Amanda has ever made to Laura. All the fuss that Amanda herself is making- the preparations, the talking etc. - where are they gone all of a sudden? Amanda's and Laura's relationship is basically dominated by Amanda. She is the one that leads it, most probably because she is the mother and Laura has certain disabilities. Laura loves her mother, and therefore she hardly ever argues with her, and lets her say whatever she wants on any subject what so ever, even though she might have heard it thousand times before. She know this does well to her mother and she wants to see her happy, therefore she remains quiet and respects her. Amanda also loves Laura, this is why she is "controlling" her so much and leading her life. She is extremely scared that Laura will make the same mistake as she did with her husband, and she is practically capable of doing anything do avoid it. Though Amanda sometimes takes this "role" too far- she is living in a world which is not her or Laura's reality, and she is taking too far at times. She always talks about her own experience and her past, and it makes Laura feel very awkward- especially because her life is not so perfect, and she feels as if she cannot be as good as her mother is. Also, we have Amanda trying to live her life through Laura, trying to fix the mistakes she made before, and this makes us think: as she really into providing a good future for Laura, or more for living her own past through Laura? But I think that it's clear enough that Amanda has an outstanding love for Laura, and she is just trying to give her the best life she could possibly have. ...read more.

It very tactless of him and the situation is rather awkward for both him and Laura, but now he is revealing the truth to her. But its obvious that even after all this Jim's effect in general was very good. Instead of running away and not dealing with the problem, Laura faces it a struggles with it, even though it's very miserable and painful for her. She gives Jim a souvenir, as a memory of what has happened between them, and she basically 'closes the chapter'. As for this relationship, we know for sure that Laura likes Jim, and that has been happening for a long time, but we cannot know or figure out what Jim is feeling for Laura. He loves the attention she gives him, and she is a way to escape his reality, so therefore we can say he might be just playing with her. We can also assume that maybe Jim does kind of like Laura and this is the way he shows it, knowing nothing will come out of it. The relationships in the Glass Menagerie reflect some of the things that happened to Tennessee Williams during his life. The most important thing here is the relation between Tom and Laura, which is very similar to the one Williams had with his sister Rose. He felt very bad for leaving her alone and later he returned, finding out that she wasn't well and it's too late to help her (that is why he is sending Tom back to Laura). We can see that Williams felt very responsible for his sister too, the way Tom does for Laura. Also, Tom and Jim are quiet similar. They both worked at a warehouse, both have dreams to escape their world (Williams wanted to write, so does Tom). Both their fathers weren't present at their childhood (Tom's father left, Williams' wasn't really present at home) and in the Wingfields home the picture of the father lays hanging on the wall, symbolizes a warning rather then a memory- don't come out like him! ...read more.