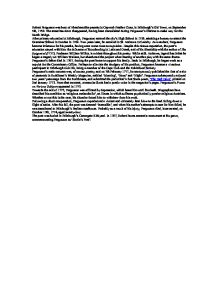 Robert Fergusson was born of Aberdeenshire parents in Cap-and-Feather Close, in Edinburgh's Old Town, on September 5th, 1750. The street has since disappeared, having been demolished during Fergusson's lifetime to make way for the North Bridge. After primary education in Edinburgh, Fergusson entered the city's High School in 1758, attaining a bursary to attend the Grammar School in Dundee in 1762. Two years later, he enrolled in St. Andrews University. As a student, Fergusson became infamous for his pranks, having once come close to expulsion. ...read more.

Fergusson's father died in 1767, forcing the poet home to support his family. Back in Edinburgh, he began work as a copyist for the Commissary Office. Perhaps to alleviate the drudgery of his position, Fergusson became a vivacious participant in Edinburgh club life, being a member of the Cape Club and the Robinhood Society. Fergusson's main concern was, of course, poetry, and on 7th February 1771, he anonymously published the first of a trio of pastorals in Ruddiman's Weekly Magazine, entitled 'Morning', 'Noon' and 'Night'. ...read more.

Whether or not this is the case, his disorder forced him to withdraw from his work. Following a short recuperation, Fergusson experienced a violent and ultimately fatal blow to the head falling down a flight of stairs. After his fall, the poet was deemed 'insensible', and when his mother's attempts to care for him failed, he was transferred to Edinburgh's Bedlam madhouse. Probably as a result of his injury, Fergusson died, incarcerated, on October 17th, 1774, aged twenty-four. The poet was buried in Edinburgh's Canongate Kirkyard. In 1787, Robert Burns erected a monument at his grave, commemorating Fergusson as 'Scotia's Poet'. ...read more.