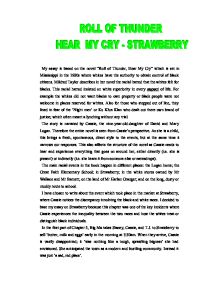 My essay is based on the novel "Roll of Thunder, Hear My Cry" which is set in Mississippi in the 1930s where whites have the authority to obtain control of black citizens. Mildred Taylor describes in her novel the racial hatred that the whites felt for blacks. This racial hatred insisted on white superiority in every aspect of life. For example the whites did not want blacks to own property or black people were not welcome in places reserved for whites. Also for those who stepped out of line, they lived in fear of the 'Night men' or Ku Klux Klan who dealt out there own brand of justice; which often meant a lynching without any trial. The story is narrated by Cassie, the nine-year-old-daughter of David and Mary Logan. Therefore the entire novel is seen from Cassie's perspective. As she is a child, this brings a fresh, spontaneous, direct style to the events, but at the same time it narrows our responses. This also affects the structure of the novel as Cassie needs to hear and experience everything that goes on around her, either directly (i.e. she is present) or indirectly (i.e. she hears it from someone else or eavesdrops). ...read more.

Our attitude towards T.J. is becoming more and more negative. His behaviour becomes increasingly disturbing because he says: 'I get me that gun and nobody gonna mess with me. I wouldn't need nobody'. T.J.'s words hold great irony as at the end of the novel he is involved in an armed robbery. And in the sequel to 'Roll of Thunder, Hear My Cry', 'Let the Circle be Unbroken', he goes on trial for murder. T.J. hands his list over to Mr. Barnett who studies the list then walks over to another counter and begins filling the order, but before he finishes a white woman calls, 'Mr Barnett, you waiting on anybody just now?' Mr Barnett turns around, 'Just them,' he says indicating them 'with a wave of his hand'. This biased comment confers on us the idea that Mr Barnett does not show any respect or value towards Cassie, Stacey or TJ as customers treating them with insolence and contempt. After Mr Barnett had finished filling the order for the white woman, he picked up T.J.'s list, but before he had moved on to the next item his wife calls for him and he walks off to help her out. So they waited anxiously several minutes for his return. ...read more.

Crushed and heartbroken, she apologizes to Lillian Jean. Then turns round and runs into the back of the wagon. A day that began full of expectations went from bad to worse. Cassie's silence on the return journey home is a reflection of the hurt and humiliation she had suffered. Cassie's first real taste of r****m had totally subdued this normally impulsive and lively nine-year-old. Cassie is an enthusiastic girl trapped in an inhumane and disgraceful racial system. Along with her brothers, Cassie is learning the hard way about r****m prevalent in the deep south of the United States at that time. She cannot comprehend as to why people of her skin colour have to back down in the face of whites, even when they have done nothing wrong. This is even more incomprehensible as Big Ma is a very strong character who Cassie admires greatly. Apologising to Lillian Jean is mortification that the headstrong Cassie finds almost impossible to bear. She is not the sort of girl to forget what has happened and later in the novel, it is no surprise that she is able to avenge her current humiliation. There is a certain amount of irony in the name 'Strawberry' which for Cassie left rather a bitter taste in the mouth. She has learnt from hard experience that things aren't always what they seem. ...read more.