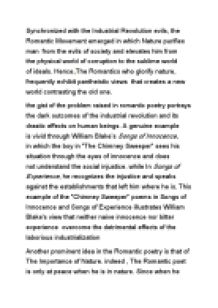 ﻿Synchronized with the Industrial Revolution evils, the Romantic Movement emerged in which Nature purifies man from the evils of society and elevates him from the physical world of corruption to the sublime world of ideals. Hence, The Romantics who glorify nature, frequently exhibit pantheistic views that creates a new world contrasting the old one. the gist of the problem raised in romantic poetry portrays the dark outcomes of the industrial revolution and its drastic effects on human beings. A genuine example is vivid through William Blake?s Songs of Innocence, in which the boy in "The Chimney Sweeper" sees his situation through the eyes of innocence and does not understand the social injustice. ...read more.

it is evident through these lines that Nature is no longer rocks or trees but rather the shelter that provides peace and harmony for the poet Wrapped in Nature , the poet?s world ceases to focus on the harshness of reality and delves into an imaginary world. This evasion is clear through the faculty of imagination. it is , in fact , elevated to a position as the supreme faculty of the mind. This contrasted distinctly with the traditional arguments for the supremacy of reason. as a matter of fact , The Romantics tended to define and to present the imagination as our ultimate "shaping" or creative power, the approximate human equivalent of the creative powers of nature or even Deity. ...read more.

, and uses this image twice in the poem. clearly , the opposites are reconciled in these lines for both adjectives '' sunny " and " ice" though contrasted they hint at a darker side of the apparent pleasure dome. Coleridge thus highlights the importance of imagination for it is considered as the core of romantic perception of the world away from the strict understanding of reason and imagination is brought to the fore since it helps romantic poets to build a new world where opposites can collide. To conclude The Romantic poets ushered in a new era of poetry which characterized by vivid and colorful language and evocative of elevating themes and ideas centered around dehumanization of man putting in favor the importance of Nature as divine shelter ...read more.