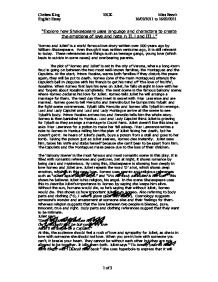 "Explore how Shakespeare uses language and characters to create the emotions of love and hate in II.ii and III.i." 'Romeo and Juliet' is a world famous love story written over 500 years ago by William Shakespeare. Even though it was written centuries ago, it is still relevant to today. These relevancies are things such as teenage gangs, young love (which leads to suicide in some cases) and overbearing parents. The plot of 'Romeo and Juliet' is set in the city of Verona, where a long-term feud is going on between the two most well-known families, the Montagues and the Capulets. At the start, Prince Escales, warns both families if they disturb the peace again, they will be put to death. Romeo (one of the main Montagues) attends the Capulet's ball in disguise with his friends to get his mind off 'the love of his life', Rosaline. When Romeo first lays his eyes on Juliet, he falls straight in love with her and forgets about Rosaline completely. The next scene is the famous balcony scene; where Romeo declares his love for Juliet. Romeo tells Juliet he will arrange a marriage for them. The next day they meet in secret with Friar Lawrence and are married. Romeo goes to tell Mercutio and Benvolio but he bumps into Tybalt and the fight scene commences. Tybalt kills Mercutio and Romeo kills Tybalt in revenge. Lord and Lady Capulet and Lord and Lady Montague arrive at the scene to see Tybalt's body. ...read more.

Juliet: If they do see thee, they will murder thee. Romeo: Alack, there lies more peril in thine eye, Than twenty of their swords! Look thou but sweet, And I am proof against their enmity." This shows he doesn't care if he gets caught, because nothing can ever hurt him again as long as he has Juliet near and as long as she loves him. Romeo's speeches are written in blank verse. This is common in love poems such as Shakespeare's sonnets, and because Romeo's speeches are mainly romantic, it suits him perfectly. This is the same as some poems are written in. Poetry is the language of love which lulls Romeo and Juliet into a more romantic mood. Long sentences and using love as a reference, shows that Shakespeare wanted to make this scene as romantic as he could. Also this scene is a private setting on Juliet's balcony and her orchard with just two characters, which makes the scene more romantic because it is their secret. This meeting is just by chance but it creates a spontaneous outlook on this scene. The balcony scene makes you feel as if the feud is all going to be over soon and it will end happily ever after, as the Montagues and the Capulets make peace. But as soon as you read the fight scene, you find out its all gone wrong. Two deaths only fire the feud more. Because Tybalt kills Mercutio and Romeo kills Tybalt, everything changes. ...read more.

This scene is written in prose which doesn't have any rhyme. Also this scene is a public setting in the town square with about seven characters, which makes the scene more open and tense because it is out in the open, for everyone to see. This meeting is planned; Tybalt goes hunting for Romeo, it is a thought of pre-meditated violence. At the end of this scene, as Prince appears, Benvolio tells him all that happened (which proves his name as 'peacekeeper'. He is trustworthy and honest, and Prince believes him. Unfortunately, Lady Capulet doesn't. She feels Romeo should be put to death because he murdered Tybalt. "Romeo slew Tybalt; Romeo must not live." shows all of her feelings in this. She shows her emotion by repeating 'O' a lot. It shows her devotion for her dear Tybalt. This scene ends with Romeo's banishment and Prince saying "Else, when he is found, that hour is his last." which is a great, abrupt end to the scene. In conclusion, I think this play is worth studying because it teaches you a lot and it has a big reference to today's society. This play is relevant to today's society because there is a lot of young love around and in some cases, (as you may see in papers worldwide) if they can't be together, they often commit suicide. In my opinion, it is both families fault for their children committing suicide. If they allowed Romeo and Juliet to be together there would be no deaths. But, on the other hand, if there were no deaths, there wouldn't be a story. Chelsea King 10CK Miss Beech English Essay 16/02/2011 to 16/02/2011 1 of 3 ...read more.