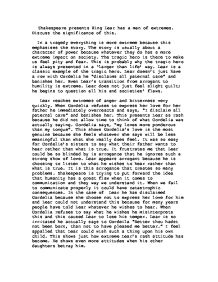 Shakespeare presents King Lear has a man of extremes. Discuss the significance of this.

Shakespeare presents King Lear has a man of extremes. Discuss the significance of this. In a tragedy everything is more extreme because this emphasises the story. The story is usually about a character of power because whatever they do has a more extreme impact on society. The tragic hero is there to make us feel pity and fear. This is probably why the tragic hero is always presented in a 'larger than life' way. Lear is a classic example of the tragic hero. Lear doesn't just have a row with Cordelia he "disclaims all paternal care" and banishes her. Even Lear's transition from arrogant to humility is extreme. Lear does not just feel slight guilt; he begins to question all his and societies' flaws. Lear reaches extremes of anger and bitterness very quickly. When Cordelia refuses to express her love for her father he immediately overreacts and says, "I disclaim all paternal care" and banishes her. This presents Lear as rash because he did not allow time to think of what Cordelia was actually saying. Cordelia says, "my loves more ponderous than my tongue". This shows Cordelia's love is the most genuine because she feels whatever she says will be less meaningful than what she really does feel. ...read more.

Lear doesn't even wish to carry on living because he is so haunted by his past. I feel sympathy for Lear because he is willing to drink poison from his own daughter because he feels he has done her so wrong. Yet Cordelia is willing to forgive Lear. Shakespeare wants to remind the audience that true love will always stand firm against the tests of time and emerge stronger still. Even King Lear's sudden wisdom is extreme. Shakespeare portrays Lear in a way that encourages the audience to question society and justice. When Lear is discussing justice he puts forward a thought provoking idea of how the "strong lance of justice" breaks so easily at the rich because thy can "Plate sins with gold". On the other hand "a pigmy's straw does pierce" the poor so easily because they have nothing or little to protect them. This phrase brings to the surface the terrible flaws of our justice system which is meant to offer a fair trial but because the poor are unable to afford the best defence they are easier to incriminate. Lear has become insightful since his ordeal with his daughters. He also realises that he too has mistreated the poor in act three scene five Lear says, "I have taken too little care of this". ...read more.

Another word which I found powerful was "vault" because vaults are strong containers that are very tough to break. They can only be opened by a code. I viewed this as Cordelia's death being the box which has trapped Lear inside with no way because Cordelia's life is the code, but she is gone. Without this code Lear cannot open the vault yet he feels he could open it with his emotions alone. This shows that Lear is a man of great mental strength to believe that he could break open a vault that no one else could. My admiration for Lear deepens has his true character begins to emerge from the emotionless Lear. Shakespeare wants to show the audience Lear is capable of emotional strength but years of being King is what made him arrogant. Shakespeare presents Lear as a man of many extremes, encouraging the audience to question people in power and how they affect society. The interesting way in which Shakespeare order's Lear's many extreme characteristics is important in emphasising these questions. The way Lear changes from arrogant and selfish to caring and self-aware moves. The audience is so moved by the transformation in his character, it makes us begin to question ourselves because if someone was once so arrogant can become so wise we too should consider trying to improve the world for the better. ...read more.