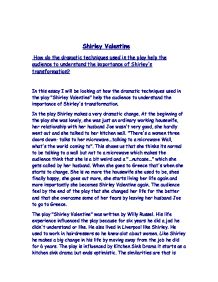 Shirley Valentine - How do the dramatic techniques used in the play help the audience to understand the importance of Shirley's transformation?

Shirley Valentine How do the dramatic techniques used in the play help the audience to understand the importance of Shirley's transformation? In this essay I will be looking at how the dramatic techniques used in the play "Shirley Valentine" help the audience to understand the importance of Shirley's transformation. In the play Shirley makes a very dramatic change. At the beginning of the play she was lonely, she was just an ordinary working housewife, her relationship with her husband Joe wasn't very good, she hardly went out and she talked to her kitchen wall. "There's a women three doors down- talks to her microwave...talking to a microwave Wall, what's the world coming to". This shows us that she thinks its normal to be talking to a wall but not to a microwave which makes the audience think that she is a bit weird and a "...nutcase..." which she gets called by her husband. When she goes to Greece that's when she starts to change. She is no more the housewife she used to be, shes finally happy, she goes out more, she starts living her life again and more importantly she becomes Shirley Valentine again. The audience feel by the end of the play that she changed her life for the better and that she overcame some of her fears by leaving her husband Joe to go to Greece. ...read more.

The last flashback is the school one. Shirley was underestimated by most of her teachers at school, they all thought she was a bad example and didnt know very much. The headmaster thought the worst of her. "someone must of told you...", this shows that they thought that Shirley wasn't clever at all and whenever she got something write they assumed that someone told her or she was cheating. Shirley was rebellious during her school years. " I became a rebel", this shows that she had enough of her teachers always bringing her down so she turned into a rebel. " I was marvellous". This shows that she liked the way she was when she was younger, because she had fun and she used to bully people which made her feel good and because she was a rebel and no-one could bossed her around like she gets bossed around by Joe. She also had a very low self-esteem while being in school and she always wanrted to be like Margarie just like Margarie wanted to be like Shirley. When Shirley first arrives in the holiday resort in Greece she meets some new characters and the other side of her character comes out. When the holidaymakers arrive they are disapointed of where they are staying, because they all have been on so many better holidays then this, however Shirley was delighted, saying, "It was like I'd come to the far side of paradise and I loved it". ...read more.

It's telling us that Greece is much more important than Liverpool in this play. It also makes the pace slow in Greece, because Greece is slow paced. In Greece the flashbacks also end this tells is that Shirley does not need to look back in her life for the happy memories, because she is happy again. The climatic moments in the first half of the play are when Joe pushes the food and it appears on Shirley's lap, when she meets Margarine and finds out that she is a hooker and when Joe doesn't appreciate her, it shows the audience how he treats her. My final impressions of Shirley's character is that she had the courage to move to Greece and leave her family behind. This shows the audience that its time for her to live her life again and be the Shirley Valentine that she used to be. It is as though Shirley went on a journey of self discovery going back to who she wants to be. The final scene with Joe shows us that she still loves Joe and wants him even though of all those things he used to say to her and how he treated her. "I didn't recognise you". This shows that she changed her appearance and looks much better than ever and Joe is shocked of how much she changed. Shirley is a very complicated character, and by putting Shirley in different places you can see other sides of her character and they become much clearer to the audience. By Giedra Lukminaite 10N ...read more.