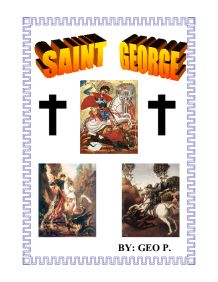 St. George was born in around the 3rd century to a Christian

SAINT GEORGE St. George was born in around the 3rd century to a Christian family. His father was from Cappadocia and served as an officer for the army. His mother was from Lydda, Palestine. She returned to her native city as a widow along with her young son, where she provided him with an education. St. George (before he became a saint) followed his father's foot steps and joined the army. He became a charismatic soldier and rose quickly through the military ranks at that time. By his late twenties he had gained the titles of Tribunus (Tribune) and then later on Comes (Count), period when George was positioned in Nicomedia as a personal guard to Roman Emperor Diocletian. In 303, Diocletian issued an order authorising the persecution of Christians across the Empire. ...read more.

Because of this, the citizens had to temporarily remove the dragon from its nest by offering the dragon a daily human sacrifice. The victim was decided by drawing lots. Eventually the local princess won the lottery. She is offered to the dragon but at this point St. George arrives. He faces the dragon, slays it and saves the princess. The grateful citizens then abandon their ancestral Paganism and convert to Christianity. The account of this tale was considered a fact but this belief about mythical dragons was abandoned. But this story contains a few religious symbolisms such as St. George can be seen as representing Christianity. The dragon is the symbol of Satan. Similarly, in early Christian stories, both the serpent (with the vast serpent being a dragon) and leviathan represent Satan. ...read more.