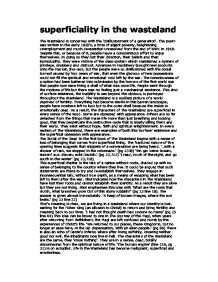 Superficiality in the poem the wasteland.

superficiality in the wasteland The Wasteland is concerned with the 'disillusionment of a generation'. The poem was written in the early 1920's, a time of abject poverty, heightening unemployment and much devastation unresolved from the end of WW1 in 1918. Despite this, or because of it, people made a conscientious effort to enjoy themselves. In doing so they lost their direction, their beliefs and their individuality. They were victims of the class system which maintained a system of privilege, snobbery and distrust. Advances in machinery brought new products onto the market, like cars, but the people were so disillusioned with the social turmoil caused by four years of war, that even the glamour of new possessions could not fill the spiritual and emotional void left by the war. The consciousness of a nation had been battered into submission by the horrors of the first world war that people now were living a shell of what was once life. People went through the motions of life but there was no feeling just a mechanical existence. This kind of surface existence, the inability to see beyond the obvious, is portrayed throughout the Wasteland. The Wasteland is a soulless picture of a world deprived of fertility. ...read more.

The ostentatious life of the rich lady in this section is described vividly. 'a burnish throne/ ivory and coloured glass/ seven branched candelabra/ the coffered ceiling'. In amongst these superficial elements of her life there is a portrait on her 'antique mantel' of Philomel. Philomel was brutally raped. In order to portray this superficiality, Eliot contrasts the old woman with Philomel. The old woman says her 'nerves are bad tonight' - a pale reflection of the intense suffering of Philomel. 'I will rush out as I am, and walk the street With my hair down so'. In part II of A Game of Chess, two female characters are talking in a local pub before closing time. They are obsessed with appearances. 'Now Albert's coming back, make yourself look smart.' The woman referred to here has just been through an abortion (a twisted version of lack of fertility). 'It's them pills I took, to bring it off'. s*x has become another mechanical action (seen again with the 'young man carbuncular' and the secretary.) Here there is no love, no feeling just a detachment and a need to fulfil the appearance of living in this land. 'What you get married for if you don't want children?' ...read more.

Eventually all are levelled by death. Eliot warns us: 'Consider Phlebus who was once handsome and tall as you'. All the things considered important mean nothing once death has claimed a person. Without belief there is no hope and so death becomes and end rather than a new beginning. What the Thunder Said The water and drought in What the Thunder Said are symbolic of belief in life. 'If there were only water among the rock' (pg 37 line 388) Water again is the symbol of fertility. If there was only a chance that there might be something that could bring life to the Wasteland, then there would be hope. Water of course becomes symbolic of faith. Eliot's message is if we had faith, then the world would begin to take root again. Eliot suggests that our superficiality is replaced by 'Datta... Dayadhvam..Dumyata' 'give, sympathise, control'. Our superficial nature has left us in an uncontrollable, unsympathetic, mean wasteland. In short, superficiality is portrayed throughout The Wasteland. Those who inhabit the land exist without faith and reject enlightenment because they are too concerned with appearances, money and other such inconsequential matters that they have lost the ability to recognise what is needed to make life better. 'Do You know nothing? Do you see nothing? Do you remember Nothing? ...read more.