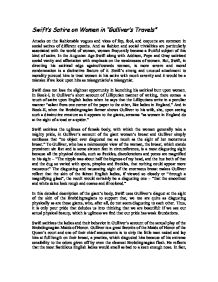 Swift's Satire on Women in "Gulliver's Travels" Attacks on the fashionable vogues and vices of fop, fool, and coquette are common in social satires of different epochs. And as fashion and social trivialities are particularly associated with the world of women, women frequently became a fruitful subject of this kind of satire. In the Augustan Age Swift along with Addison, Pope and Gray satirized social vanity and affectation with emphasis on the weaknesses of women. But, Swift, in directing his satirical edge against/towards women, is more severe and moral condemnation is a distinctive feature of it. Swift's strong and unusual attachment to morality pursued him to treat women in his satire with much severity and it would be a mistake if we look upon him as misogynistic/ a misogynist. Swift does not lose the slightest opportunity in launching his satirical butt upon women. In Book-I, in Gulliver's short account of Lilliputian manner of writing, there comes a touch of satire upon English ladies when he says that the Lilliputians write in a peculiar manner "aslant from one corner of the paper to the other, like ladies in England." ...read more.

In this detailed description of the giant's body, Swift uses Gulliver's disgust at the sight of the skin of the Brobdingnagians to support that, we too are quite as disgusting physically as are these giants, who, after all, do not seem disgusting to each other. Thus, it is only pour pride that deludes us into thinking that we are beautiful: if we see our actual physical beauty, which is ugliness we find that our pride has weak foundations. Swift satirizes the ladies and their behavior in Gulliver's account of the sexual play of the Brobdingnagian Maids of Honor. Gulliver is a great favorite of the Maids of Honor of the Queen's court and one of their chief amusements is to strip the little man naked and lay him at full length on their breast, a practice, which disgusted him because of his extreme sensibility to the odors given off by even the cleanest Brobdingnagian flesh. He reflects that the most fastidious English ladies would smell as bad to a keen enough nose. ...read more.

In the Gulliver's conversation with the Master-Horse in Book-IV, Swift attacks the female frivolousness and laziness. Thus Gulliver tells the Houynhnm master that "this whole globe of earth must be at least three times gone round, before one of our better female Yahoos could get her breakfast on a cup to put it in." Again the characteristic proneness of female to dressing and make-up is satirized in the same book. Gulliver inform the Horse master that the dressing of a man is the culmination of "the workmanship of a hundred tradesmen" but the number increases when a lady is at the center of the case of dressing - "and five time (i.e., five hundred tradesmen), the number to adorn my wife." Swift is not a misogynist; he does not despise the womankind rather he is simply presenting a witty exposure of the dirty habits and lack of good sense of certain types of women of his time. He does not attack the whole female race, rather those who ate full of vanity relating their physical beauty. He shows, in effect, that our physical beauty or physicality is not such an exquisite thing as we are prone to think it to be; it id far from an attractive thing. ...read more.