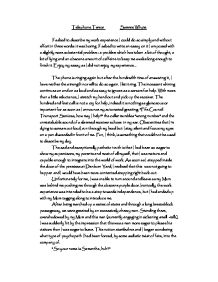 Telephone Terror Sammie Whyte If asked to describe my work experience I could do so simply and without effort in three words: it was boring. If asked to write an essay on it I am posed with a slightly more substantial problem- a problem which has taken a lot of thought, a lot of lying and an obscene amount of caffeine to keep me awake long enough to finish it. Enjoy my essay as I did not enjoy my experience... The phone is ringing again but after the hundredth time of answering it, I have neither the strength nor will to do so again. I let it ring. The incessant whining continues on and on as loud and as easy to ignore as a scream for help. With more than a little reluctance, I stretch my hand out and pick up the receiver. The hundred and first call is not a cry for help, indeed it is nothing as glamorous or important for as soon as I announce my automated greeting, "Fife Council Transport Services, how may I help?" the caller mumbles "wrong number" and the unmistakable sound of a slammed receiver echoes in my ear. Obscenities that I'm dying to scream out loud, run through my head but I stay silent and focus my eyes on a pen discarded in front of me. ...read more.

Before I could do anything stupid, I heard my mum laughing and announcing that he was mistaken and she was my Mum, here for moral support. As I lifted my eyes to see his reaction, I saw him glance at me with a look that was reminiscent of pity; showing that he thought I was obviously some sad little child who couldn't stand on her own two feet. I didn't know which was worse- being a teenage delinquent or a sad little Mummies girl; either way I was still insulted. After a quick tour, my Mum made a hasty exit and I was ushered into a bright, modern, spacious yet horribly empty room. 'Psycho' then waved a cheery goodbye and disappeared. Gazing around, four computer screens stared blankly at me and I was about to conclude that I had indeed been abandoned by the 'Psycho', that was until a frantic waving caught my eye. I turned to see a small older man pumping his arm back and forth. This was an obvious attempt at gaining my attention from behind the precariously stacked towers of paper resting on the desk in front of him. However, I was by this point completely terrified and all I could do was stare at him. ...read more.

"Is, um, Big Tam around?" "Big Tam? OH! Tom?" "Right" I said, more than a little confused, why hadn't the caller asked for Tom? "Is Tom around?" "Tom is the man who showed you around earlier." "Yes but is he around now?" I asked perplexed at the small man's avoidance of answering the question. "Just take a message." Okay, take a message. Take a message. Mentally psyching myself up, I reached out, picked up the phone and clicked the secrecy button off. "Can I take a message?" I enquired frantically searching for a pen and piece of paper. "So he's not there?" "No, he wouldn't be...that's why I'll take a message and give it to him!" I looked around in desperation, but I received no moral support or help. I noted the small man was back on the phone. I realised the caller hadn't answered so I enquired again, more assertively. "Can I take a MESSAGE? Please!" "Nah, it's okay lass I'll call later." The phone line went dead. I could have cried. In exasperation, I threw down the pen I had found and poised ready to take a message. Then the phone rang again. Without realising, I had snatched it up and was practically barking a refined version of the greeting I had said before. This was how my hour, my day, my week went on. Call after call, after call. I can still hear the ringing; ring-ring, ring-ring... ...read more.