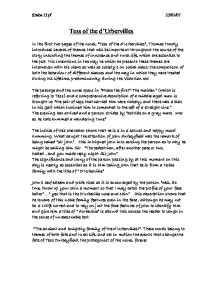 Tess of the d'Urbervilles In the first two pages of the novel, "Tess of the d'Urbervilles", Thomas Hardy introduces several of themes that will be important throughout the course of the story including the themes of innocence and rural life, which are essential to the plot. His intentions in the way he which he presents these themes are interwoven with his views as well as society's on social class; the comparison of both the behaviour of different classes and the way in which they were treated during his lifetime, predominantly during the Victorian era . The passage and the novel opens in "Phase the first"-The maiden" (which is referring to Tess) and a comprehensive description of a middle aged man is brought up "the pair of legs that carried him were rickety, and there was a bias in his gait which inclined him to somewhat to the left of a straight line." The evening has arrived and a parson strides by "astride on a gray mare.. who as he rode hummed a wandering tune" The initial of this character shows that he is a in a casual and happy mood humming. What caught the attention of John durbeyfield was the remark of being called "sir john" . .this intrigued john into asking the parson as to why he might be calling him Sir. "The pedestrian, after another pace or two, halted...and you made reply night Sir John" The significance and irony of the parson passing by at this ...read more.

In the reign of King John one of them was rich enough to give a manor to the Knights Hospitallers; and in Edward the Second's time your forefather Brian was summoned to Westminster to attend the great Council there. You declined a little in Oliver Cromwell's time, but to no serious extent, and in Charles the Second's reign you were made Knights of the Royal Oak for your loyalty. Aye, there have been generations of Sir Johns among you, and if knighthood were hereditary, like a baronetcy, as it practically was in old times, when men were knighted from father to son, you would be Sir John now." "Ye don't say so!" "In short," concluded the parson, decisively smacking his leg with his switch, "there's hardly such another family in England." "Daze my eyes, and isn't there?" said Durbeyfield. "And here have I been knocking about, year after year, from pillar to post, as if I was no more than the commonest feller in the parish....And how long hev this news about me been knowed, Pa'son Tringham?" The clergyman explained that, as far as he was aware, it had quite died out of knowledge, and could hardly be said to be known at all. His own investigations had begun on a day in the preceding spring when, having been engaged in tracing the vicissitudes of the d'Urberville family, he had observed Durbeyfield's name on his waggon, and had thereupon been led to make inquiries about his father and grandfather till he had no doubt on the subject. Shabs 13yf 23/01/07 ...read more.