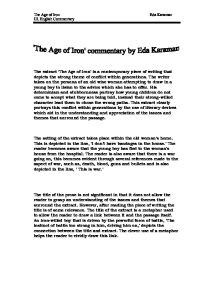 'The Age of Iron' commentary by Eda Karaman.

The extract 'The Age of Iron' is a contemporary piece of writing that depicts the strong theme of conflict within generations. The writer takes on the persona of an old wise woman attempting to draw in a young boy to listen to the advice which she has to offer. His determinism and stubbornness portray how young children do not come to accept what they are being told, instead their strong-willed character lead them to chose the wrong paths. This extract clearly portrays this conflict within generations by the use of literary devices which aid in the understanding and appreciation of the issues and themes that surround the passage. The setting of the extract takes place within the old woman's home. This is depicted in the line, 'I don't have bandages in the house.' The reader becomes aware that the young boy has fled to the woman's house from the hospital. The reader is also aware that there is a war going on, this becomes evident through several references made to the aspect of war, such as, death, blood, guns and bullets and is also depicted in the line, ' This is war.' The title of the prose is not significant in that it does not allow the reader to grasp an understanding of the issues and themes that surround the extract. ...read more.

Also, as the old woman is attempting to ensnare and dishearten a young boy out of battle creates an atmosphere of tension and anxiety. The fact that the boy refuses to take this advice from the older woman and instead go out to battle leaves the reader in a state of agony and melancholy. The wise old woman is one of the chief characters in this extract. The name of the women is not revealed in the piece however, the reader is able to grasp an insight into her character through the effective use of dialogue. Throughout the extract the reader is aware that the women is continuously giving advice to the young boy who has the will of iron, a strong determination and a powerful force within him to fight in battle. Her age is portrayed in the way she speaks to the young boy accusing him of being immature and inexperienced, 'You are still children. You are throwing your lives before you know what life can be.' The giving of advice not also depicts that this women is protective but also allows the reader to appreciate her wise comments. The writer uses a powerful simile, which further reveals the woman's sense of protection over the young boy, 'As a hen that loses its chicks will take in a duckling, oblivious of the yellow fur, the flat beak, and teach it to take sand baths, peck at worms.' ...read more.

The young boy seemed unmindful to the death of his friend Bheki who had been killed. He asked the old woman, 'Where is Bheki?' the old woman trying to discourage the young boy from fighting in battle began to effectively describe his death graphically. She replied to him by saying, 'He is in a box in a hole with earth heaped on top of him. He is never going to leave that hole. Never, never, never.' Her graphical description of death and her use of language and repetition were done in order to persuade him to forget about fighting and what may happen to him if he was to take part in the battle. The boy's ignorance to death and the old woman's consistent giving of advice all add to theme of conflict within generations. Overall, the extract taken from the novel 'The Age of Iron,' written by J.M. Coetzee, is an intriguing piece of writing in which the conflict of generations is clearly depicted. Through the use of dialogue the reader is provided an insight into the events that surround a young boy's life during the time of war. Cleverly written with the employment of successful literary techniques this extract is able to grasp the reader's attention as it appears easily comprehendible and appealing to the reader's senses. The Age of Iron Eda Karaman HL English Commentary ...read more.