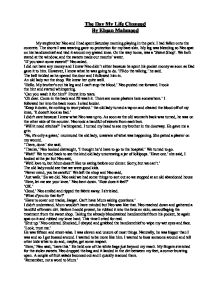 The Day My Life Changed

The Day My Life Changed By Ehsan Mahmood My stepbrother Neo and I had spent Saturday morning playing in the park. I had fallen onto the concrete. The shorts I was wearing gave no protection for my bare skin. My leg was bleeding so Neo spat on his handkerchief and tied it around my grazed knee. On the way home, was a 'Sweet Shop'. We both stared at the window, and the sweets made our mouths� water. 'D�you want some sweets?' Neo asked. I did not have any money and I knew Neo didn't either because he spent his pocket money as soon as Dad gave it to him. However, I knew what he was going to do. 'I'll do the talking.' he said. The bell tinkled as he opened the door and I followed him in. An old lady ran the shop. We knew her quite well. 'Hello. My brother's cut his leg and I can't stop the blood.' Neo pushed me forward. I took the hint and started whimpering. 'Can you wash it for him?' I burst into tears. 'Oh dear. Come in the back and I'll wash it. There are some plasters here somewhere.' I followed her into the back room. I cried louder. 'Keep it down, its nothing to worry about.' the old lady turned a tap on and cleared the blood off of my knee, 'It doesn't look so bad.' I didn't care because I knew what Neo was up to. As soon as the old woman's back was turned, he was on the other side of the counter. Neo took a handful of sweets from each box. 'Will it need stitches?' I whimpered. I turned my head to see my brother in the doorway. He gave me a grin. 'No, it's only a graze,' murmured the old lady, unaware of what was happening. She patted a plaster on my wound. 'There, done.' she said. 'Thanks,' Neo looked distraught, 'I thought he'd have to go to the hospital.' ...read more.

How long would Neo be? What were they doing in that big factory? What could I do? I stood up again and started kicking a few stones around. I checked the time again. Ten to four. How much longer? I really began to worry now. What if Neo and Morpheus were hurt? Perhaps they were lying under a girder that had fallen from the roof. Perhaps they were dead and then I'd be in trouble with Mum and Dad for not telling them where Neo was. I'd been here nearly an hour now, and I was getting thirsty and Mum would be getting tea ready. I'd be late and I'd be in big trouble and Neo would be dead and I'd have to go to his funeral and kiss his cheek as he lay in his coffin the same way Aunt Lilly had done to Uncle Sam when he'd had his car crash. My worst fears were coming true. A noise from above suddenly made me jump. I looked up to see two pairs of legs dangling over the wall. 'Alright, Jaegar.' said Neo with a grin, 'Been waiting long?' He and Morpheus laughed. I tried to regain my composure but Neo knew me too well. It was obvious that I was upset and I was just glad that I hadn't started crying. 'You all right, Jaegar?' Morpheus said, not caring at all. 'Where've you two been? I�ve been waiting for ages. What�ve you been doing?' 'In there.' said Neo, nodding behind him. 'Having a look around.' 'Yeah, we�ve been having a great time.' said Morpheus. 'Just looking about. You know.' 'I�ve been waiting here for ages.' I repeated. 'I was just going to climb over and come and get you. We�ll be late for tea.' 'Yeah sure. I bet. Who cares what you were going to do anyway?' Neo looked at me uncertainly. ...read more.

Some kids were washing up cups in the kitchen and Morpheus pushed them out. 'Open the bag.' Morpheus demanded. I threw it to him. 'Open it yourself.' Morpheus emptied the contents onto the draining-board. The water pistols slid out into the sink. All two dozen, cellophane-wrapped. 'Where did you buy these?' 'Didn�t buy them.' 'Where did you get them then?' 'Where did you get yours?' 'How did you know...?' Morpheus was speechless. 'Look, Jaegar,' Neo continued, 'yeah, we got some from that factory yesterday but they weren�t like these. Ours were second hand. The ones they throw away because they don�t work properly. We found them in a skip at the back of the factory.' I sat down on a chair. I�d outdone my brother big-time. 'Did you break in?' Neo asked. 'Yes.' 'What about the security guard?' 'Wasn�t one.' 'And his dog?' 'Didn�t see it.' I felt ill. 'How�d you get in?' 'Gate. Climbed. Window. Penknife. Easy.' 'Burglar alarm?' 'What burglar alarm?' 'Jaegar! You could have been caught. Morpheus and me had a good look round before yesterday. We made sure the guard was inside doing his round. Didn�t you see the alarm boxes on the wall? We only went in the yard. You could go to prison!' Morpheus was looking at me in a very strange way. 'Stupid kid. Your brother�s really dumb, Neo.' 'Yeah, you idiot, Jaegar. You could have really messed up. What would Mum and Dad say?' I couldn�t speak. I stood up, grabbed my satchel and staggered out of the kitchen. Jaz looked at Lenny and shook his head. 'What am I going to do with that kid?' I went to the park and sat on a bench. How could I have been so stupid? Sure, I�d got what I wanted. I�d been like Neo for a day but I hadn�t thought like him. He was right: I was dumb. I�d risked everything I�d gained so far in my short life. I�d been humiliated yet again and I�d never be good for anything in Neo's eyes. I stood up, threw the bag, and went home for tea. ...read more.