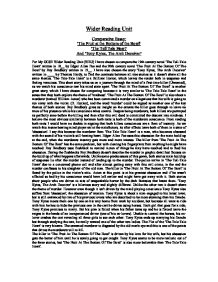 'The Fruit at the Bottom of the Bowl' 'The Tell Tale Heart' And 'Tony Kytes, The Arch Deceiver'

Wider Reading Unit Comparative Essay: 'The Fruit at the Bottom of the Bowl' 'The Tell Tale Heart' And 'Tony Kytes, The Arch Deceiver' For My GCSE Wider Reading Unit (WRU) I have chosen to compare the 19th century novel 'The Tell-Tale Heart' written in 18__ by Edgar Allan Poe and the 20th century novel 'The Fruit At The Bottom Of The Bowl' by Ray Bradbury written in 19__. I have also chosen the story 'Tony Kytes, The Arch Deceiver' written in ____ by Thomas Hardy, to find the contrasts between all tree stories as it doesn't share all the same themes. 'The Tale-Tale Heart' is a Brilliant Horror, which leaves the reader both in suspense and feeling veracious. This short story takes us on a journey through the mind of a first time killer (Unnamed), as we watch his conscience tear his mind state apart. 'The Fruit At The Bottom Of The Bowl' is another great story, which I have chosen for comparing because it is very similar to 'The Tale-Tale Heart' in the sense that they both explore the theme of 'madness'. 'The Fruit At The Bottom Of The Bowl' is also about a murderer (named William Acton) who has been committed a murder on allegations that his wife is going to run away with the victim (D. Huxley), and the word 'murder' could be argued as another one of the key themes of both stories. Ray Bradbury gives us insight on the extents the killer goes through to leave no trace of his presence while his conscience takes control. ...read more.

The physical appearance, the way they act or even their name could tell more about the story than if we just simply read it. For example; 'The Tell-Tale Heart' contains nameless narrator, which may have been used because a murder is very mysterious and unless caught no one will actually know who the murderer is. Thinking about that point, it makes the first person narrative seem more realistic because it makes me feel as if I am really at the scene of the crime, as it is happening. The protagonist or narrator becomes the true focus of the tale. This narrator may be male or female because Poe uses only "I" and "me" in reference to this character. Most readers assume that the narrator is a male because of a male author using a first person point of view; however, this story can also be plausible when the deranged protagonist appears as a woman. Most critics would argue this point by saying that Poe would "assume" that the reader would "know" that the protagonist was male, therefore, he would see no need to identify his sexless narrator. However, Poe was said to be a perfectionist who left very little to guesswork. Could it be that this was no accident or something that he thought would be universally understood? But that Poe was creating a story whose impact could be changed simply by imagining this horrendous and vile deed being committed by a woman. Like 'The Tell-Tale Heart' the victim in 'The Fruit At The Bottom Of The Bowl' knew his killer. ...read more.

This time reference builds tension and builds a certain mood as our suspense makes us wonder will he leave in time. Ray Bradbury uses a lot of punctuation to help us feel how scared and worried the killer actually is. The mood or atmosphere in 'The Tale-Tale Heart' can be described as very spooky and mysterious. Every night the murderer plagues his victim, building suspense as he takes step by step precautions while entering the room. These to stories atmospheres both have a horror feel to it, where as Tony Kytes is quite different. The main suspense is built up by the thought of Tony Kytes being caught. The mood becomes tense once all three ladies are inside the cart. My favourite out of the tree short-story has to be 'The Tell-Tale Heart'. This was because it was extremely effective in giving an excellent view of insanity and madness through the eyes, actions and thoughts of a first time murderer. This story for me kept me most in suspense and wanting to read more. However the other stories were very good as well especially 'The Fruit At The Bottom Of The Bowl. I felt sorry for Acton because his obsession got the better of him. He was unaware of his actions and, I suppose, this is the cause of insanity, not knowing what you are doing. I have learnt about the omniscient skills writers use to adopt masks as if to hide what they think, and let you make up your own mind. Each writer is very skilled and I hope to read more of their work. ...read more.