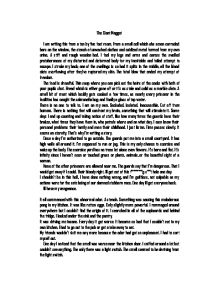 The Giant Maggot I am writing this from a ten by five foot room. From a small cell which ahs seven corroded bars on the window, the stench of unwashed clothes and oxidized metal formed from my own urine. A stiff and rough wooden bed. I feel my legs and arms and caress the swelled protuberances of my distorted and deformed body for my inevitable and failed attempt to escape. I stroke my back; one of the swellings is so bad it splits in the middle, all the blood clots overflowing after they've ruptured my skin. The fatal blow that ended my attempt of freedom. The food is dreadful. Thin soup where you can pick out the hairs of the cooks with both of your pupils shut. Bread which is either gone off or it's as stale and solid as a marble slate. A small bit of meat which luckily gets cooked a few times, as nearly every prisoner in the facilities has caught the salmonella bug; and finally a glass of tap water. There is no one to talk to. I am on my own. Secluded. Isolated. Inaccessible. ...read more.

Cheese!? It was telling me to get cheese , I said to myself no way , I'm not feeding no maggot, and then again the pain came back to my head, it was unbearable so I did what I had to do. I got the cheese and I fed the beast. I then rested and went to bed hoping none of this was really and all this things were a dream. I wished by the morning everything would be back to normal. When I woke one wish happened there was no cheese just the skeleton of the mouse but instead of the maggot there was a fat white sausage on the table, it was al slimy and shiny I realized it was still the maggot twice as big. I fainted. I then woke up with the same massive headache. The maggot was hungry it wanted to eat again I tried thinking of running away but the maggot gave me a shock , it knew everything I was thinking , it was reading my mind. I was being held hostage by a maggot the size of a sausage. It was hungry so it told me quickly to get and get it some food, I obeyed like a slave. ...read more.

They would've laid eggs and multiplied. The would've been the new dominant race in our world, above us in the food chain, controlling us like we control animals in the world, we would've been governed by insects us humans kings of the earth, and I stopped this from happening. What thanks do I get for my efforts? Thrown in jail and locked up. Treated like a psychopathic, a schizophrenic, no one is allowed near my presence. I'm kept in solitary confinement in a cell on my own. In the darkness. I'm trying to learn and study a way to get out, ill escape and have my revenge on humans. Every day they bring me food. I drink the soup and eat the bread. But keep the pieces of meat..... I put them under my bed, they're starting to go bad, and they smell a bit, that familiar smell. The smell of revenge. The guards can keep out visitors, but they can't keep out flies. One piece of meat has maggots on it, one of the maggots is rather large...bigger then the rest. It seems to be staring at me, that memorable look. He seems friendly; ill do anything it wants me to do. Anything at all Anything.... Bruno Babolin ...read more.