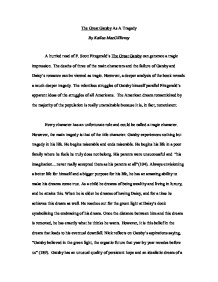 The Great Gatsby As A Tragedy

The Great Gatsby As A Tragedy By Kailea MacGillivray A hurried read of F. Scott Fitzgerald's The Great Gatsby can generate a tragic impression. The deaths of three of the main characters and the failure of Gatsby and Daisy's romance can be viewed as tragic. However, a deeper analysis of the book reveals a much deeper tragedy. The relentless struggles of Gatsby himself parallel Fitzgerald's apparent ideas of the struggles of all Americans. The American dream romanticized by the majority of the population is really unattainable because it is, in fact, nonexistent. Every character has an unfortunate role and could be called a tragic character. However, the main tragedy is that of the title character. Gatsby experiences nothing but tragedy in his life. He begins miserable and ends miserable. He begins his life in a poor family where he feels he truly does not belong. His parents were unsuccessful and "his imagination...never really accepted them as his parents at all"(104). Always envisioning a better life for himself and a bigger purpose for his life, he has an amazing ability to make his dreams come true. ...read more.

He appears to have been particularly saddened by the decayed social and moral values of the well-established American aristocracies. The old wealth seen on East Egg and the people attending Gatsby's parties signify the careless materialism of the time. Tom and Daisy are prime examples of this. They outrage Nick and by the end of the novel he decides that they are "careless people...they smashed up things and creatures and then retreated back into their money" (187). As seen through the disappointed eyes in Dr. Eckleburg's glasses on the billboard at the Valley of the Ashes, the world itself was in a tragic state. The distinct social classes are what kept Gatsby and Daisy apart. In the beginning, it was his lack of money that made them unable to be together. After they are reunited, it is the great division of the old and new wealth that keeps them apart. Gatsby could never be accepted into Daisy's social class because on East Egg he could not have self-made wealth. ...read more.

The novel's title itself is ironic. Gatsby is not "great" because he uses crime and lies in an attempt get him to where he wants to be in society. He fabricates a past for himself involving his family, education, and the way he fell into his money. His name is not actually Gatsby either. Like the "Great Houdini", Gatsby can make unreal things seem real. His entire life is an illusion to everyone but Nick. It is heartbreaking that in order to be happy Gatsby feels that he must put up these false fronts and skew reality in the eyes of others to make him into something that he is not. Gatsby's struggles are very similar to those of the American society in this particular era. In one case, the contender is reaching for an unworthy dream and in the other it is the contender that is unworthy of the dream. Fitzgerald combines the two struggles to produce an overall tragic comment on society in the 1920s. The lack of heart in the old aristocracy, the death of the American dream and the falsehood of the dreams unite to form the tragedy in the novel. ...read more.