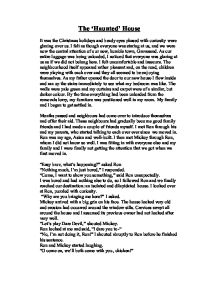 The 'Haunted' House It was the Christmas holidays and beady eyes phased with curiosity were glazing over us. I felt as though everyone was staring at us, and we were now the central attention of our new, humble town, Gravesend. As our entire luggage was being unloaded, I noticed that everyone was glaring at us as if we did not belong here. I felt uncomfortable and insecure. The neighbourhood itself appeared rather pleasant and, on the road, children were playing with each over and they all seemed to be enjoying themselves. As my father opened the door to our new house I flew inside and ran up the stairs immediately to see what my bedroom was like. The walls were pale green and my curtains and carpet were of a similar, but darker colour. By the time everything had been unloaded from the removals lorry, my furniture was positioned well in my room. My family and I began to get settled in. ...read more.

As we progressed further in, Ron and Mickey began to tell me the story of the previous owner of the house and how she killed herself. When we reached the front door, which desperately needed repainting, it was locked. I began to have second thoughts, but I did not want to let Ron and Mickey down, especially as this was a new area to me and they were the only friends I had. Mickey revealed a screwdriver from his jumper pocket and began to break in. A couple on minutes later, there was a click and the door opened. I felt a sudden urge to leave the house. As soon as I stepped in, the hairs on my back stood up. We took a step further and the floorboards creaked. This house really started to scare me. "Bang!" As I turned around, the door had slammed shut. Ron and Mickey had disappeared. I ran to the door and pulled on it. ...read more.

It was still locked. "What do I do?" I thought. I started crying and sat down in the corner beside the door. My heart was still beating relatively fast and I was finding it hard to breathe. Wondering why I had come into this house, I became worried thinking about what may have happened to Ron and Mickey. My hair was filled with cobwebs and I could feel the dampness of the wall along ma back. Footsteps started creeping closer and closer by the second. I put my face into my hands and just shut my tearful eyes. I waited. Nothing happened. I gradually lifted my head up and saw Mickey. A sign of relief and happiness came into my eyes. "Mickey, watch out, behind u!" I shouted as the ghost entered the passage and stood behind Mickey. The ghost walked over towards me and removed its wig, to reveal Ron. Ron and Mickey busted out in a panic of laughter. It had been a prank all along. I finally saw the funny side and we all laughed so much, that tears came into our eyes. ...read more.