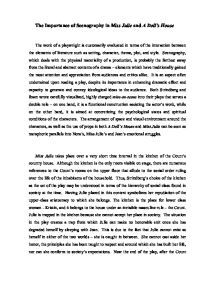 The Importance of Scenography in Miss Julie and A Doll's House

The Importance of Scenography in Miss Julie and A Doll's House The work of a playwright is customarily evaluated in terms of the interaction between the elements of literature such as setting, character, theme, plot, and style. Scenography, which deals with the physical materiality of a production, is probably the farthest away from the literal and abstract contents of a drama - elements which have traditionally gained the most attention and appreciation from audiences and critics alike. It is an aspect often undermined upon reading a play, despite its importance in enhancing dramatic effect and capacity to generate and convey ideological ideas to the audience. Both Strindberg and Ibsen wrote carefully visualized, highly charged mise-en-scene into their plays that serves a double role - on one hand, it is a functional construction assisting the actor's work, while on the other hand, it is aimed at concretizing the psychological states and spiritual conditions of the characters. The arrangement of space and visual environment around the characters, as well as the use of props in both A Doll's House and Miss Julie can be seen as metaphoric parallels into Nora's, Miss Julie's and Jean's emotional struggles. ...read more.

Ibsen's stage directions read: Meanwhile there has been a knock at the hall door... The door is half open and Krogstad appears.3 Ibsen emphasizes the fact that the door through which Krogstad makes his unsolicited entrance had been left open - and Nora's life susceptible to intrusion, leaving her in a disquieted state of mind. Nora's psychological struggle is further emphasized by Ibsen through the use of the Christmas tree, which - aside from its use as a conventional indicator of the passage of time - serves as a visual representation of Nora's emotional turmoil. Soon after Krogstad's visit, Nora tries to set aside the eminent threat to the destruction of her "doll house" by asking the maid to bring in the tree, and place it in the middle of the floor. She is confident that her home and her family must come first - before any legal matter. The audience recognizes the tree as a powerful symbol representing family security and happiness, set defiantly in the center of the stage to dominate it, as if its mere presence is sufficient to banish Nora's troubles. As Nora begins to dress the tree, she states: A candle here - and flowers here -. ...read more.

This is a thorough study of the topic, well expressed and supported by textual references. In particular, the use of the sets of these two plays to represent the physical and psychological states of the protagonists is very well analysed and supported. The conclusion could be more specific to the scenology of the subject plays, perhaps even briefly covering the different uses of scenery as well as the similarities.

There are some passages of the essay where the writer strays from the task, particularly in the section about "Miss Julie", into more a general discussion of the plays. There are also some ambiguities of expression.

Paragraph and sentence construction are very well managed and lexis is excellent.