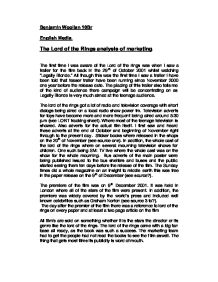 The Lord of the Rings analysis of marketing.

Benjamin Woollan 10Br English Media. The Lord of the Rings analysis of marketing. The first time I was aware of the Lord of the rings was when I saw a trailer for the film back in the 29th of October 2001 whilst watching "Legally Blonde." All though this was the first time I saw a trailer I have been told that teaser trailer have been running since November 2000 one year before the release date. The placing of this trailer also tells me of the kind of audience there campaign will be concentrating on as Legally Blonde is very much aimed at the teenage audience. The lord of the rings got a lot of radio and television coverage with short dialogs being aired on a local radio show power fm. Television adverts for toys have become more and more frequent being aired around 5:30 p.m (see LORT tracking sheet). Where most of the teenage television is showed. ...read more.

The day after the premier of the film there was a reference to lord of the rings on every paper and at least a two page article on the film All film's are sold on something whether it is the stars the director or its genre like the lord of the rings. The lord of the rings came with a big fan base all ready, as the book was such a success. The marketing team had to get the people had not read the books to see the film aswell. The thing that gets most films its publicity is word of mouth. Publicity materials and posters are found in most daily newspapers and film magazines such as empire. Posters are found on the back of the radio times and in most teenage magazines. Popcorn cartoons also have pictures of the characters and pictures of the ring. There are big standees in the front of the cinemas. ...read more.

He did this by splitting the book into three sections, making three films, which he made all at one time, taking 18 months to film. For this film to make money, it needed good publicity, but even more important was word of mouth. The book has a large fan base, which needed a huge amount of effort to be convinced that the film has done the original fantasy novel justice and spreading good word of mouth. The loyal fans of the book since they have heard the word that the book is being filmed have been logged onto the Tolkien website where any rumour is spread across Britain and through the world weather the producers of the film like it or not. This overall concluded my analysis of the lord of the rings marketing as no matter how hard the marketing team of any film tries as soon as the film has been seen or that a rumour has been heard they can not do anything to stop it coming out. ...read more.