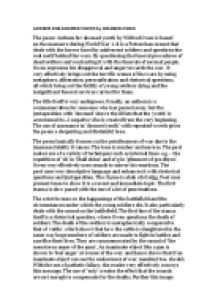 The poem Anthem for doomed youth by Wilfred Owen is based on the massacre during World War 1.

﻿ANTHEM FOR DOOMED YOUTH by WILFRED OWEN The poem ?Anthem for doomed youth? by Wilfred Owen is based on the massacre during World War 1. It is a Petrarchan sonnet that deals with the horror faced by adolescent soldiers and questions the real motif behind the wars. By questioning the funeral procedures of dead soldiers and contrasting it with the funerals of normal people, Owen expresses his disapproval and anger towards the war. It very effectively brings out the horrific scenes of the wars by using metaphors, alliteration, personification and rhetorical questions, all which bring out the futility of young soldiers dying and the insignificant funeral services carried for them. The title itself is very ambiguous. Usually, an anthem is a commemoration for someone who has passed away, but the juxtaposition with ?doomed? shows the ill fate that the ?youth? is accustomed to. A negative vibe is created from the very beginning. The use of assonance in ?doomed youth? with repeated vowels gives the poem a despairing and disdainful tone. The poem basically focuses on the pointlessness of war due to the immense fatality it causes. The tone is somber and morose. The poet makes use of a variety of techniques such as internal lines. ...read more.

The last line of the octave introduces a new idea about the background that the soldiers come from and shows how deep the sorrow is of the loss. The first stanza has a lot of auditory images that help to visualize the terror and trauma in the battlefield. Words like ?stuttering rifles rapid rattle?, and ?monstrous anger of the guns? helps the reader to visualize the unpleasant and cacophony during the war. The alliteration in ? stuttering rifles rapid rattle? shows the constant firing of bullets and the repetition of ?r? shows the frequency of deaths. Also by contrasting such violent sounds with that of ?choirs? and ?prayers?, the poet highlights how the funeral ceremonies for such martyrs is so different to that of a normal dead person. Further the idea of the funeral procedures of dead soldiers being contrasting to that of a traditional one is present throughout the poem. The title itself holds evidence for this. In a traditional ceremony an ?anthem? is played in remembrance for the dead soldiers, whereas for soldiers it is ?all doomed? and there is a dark future ahead. ...read more.

The last line of the sestet is very powerful. As dusk marks the end of light, ?each slow dusk? will mark the death of the martyrs and the end of their struggle. the night marks respect to the soldiers, whereas ?drawing down of blinds? usually takes place in the room with the coffin as a symbol of respect. The long vowel sounds in the last line shows how the memory of the soldiers will remain etched in the memory of the poet for the courageous tasks they have undertaken. Thus it throws light upon how first the soldiers sacrifice their lives for the country, and even after that they don?t get a proper funeral as a token for respect in fact they get to witness more and more of their colleagues dying instead.. Thus the poet targets the uselessness of war in being unfruitful and creates vivid images with the use of auditory and visual images. It very successfully depicts how the youth, the generation of the future has a very dark life ahead if war continues to brutally end their lives. The poem leaves the reader with a sense of shock by exposing the horrific battlefield images and fills us with sympathy for the many who lost their lives. ...read more.