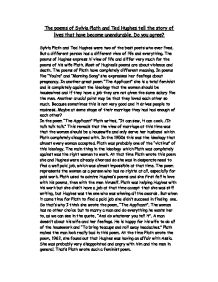 The poems of Sylvia Plath and Ted Hughes tell the story of lives that have become unendurable. Do you agree?

The poems of Sylvia Plath and Ted Hughes tell the story of lives that have become unendurable. Do you agree? Sylvia Plath and Ted Hughes were two of the best poets who ever lived. But a different person has a different view of life and everything. The poems of Hughes express hi view of life and differ very much for the poems of his wife Plath. Most of Hughes's poems are about violence and death. The poems of Plath have completely different meaning. In poems like "You're" and "Morning Song" she expresses her feelings about pregnancy. In another great poem "The Applicant" she is a total feminist and is completely against the ideology that the women should be housewives and if they have a job they are not given the same salary like the men. Another crucial point may be that they loved each other so much. Because sometimes this is not very good and it drives people to madness. Maybe at some stage of their marriage they had had enough of each other? In the poem "The Applicant" Plath writes, "It can sew, it can cook. /It talk talk talk." This reveals that the view of marriage at this time was that the women should be a housewife and only serve her husband which Plath completely disagreed with. ...read more.

It also shows the feelings of the poet about having this baby. "One cry and I stumble from bed, cow-heavy and floral- In my Victorian nightgown." The quote clearly expresses that Plath is not very happy with having that baby but she has to look after it because it is her "product of life". She hates the baby when it's just a baby, but when it is growing up she likes it more. People expect from her to love the baby because this is the ideology of domesticity. The baby is also reminding her of the time she no longer has because the baby is sucking her freedom "like a fat gold watch". Another great poem which Plath written is the poem "Edge". The poem was written on 5th of February 1963 which is a week before she committed suicide. The poem is just like a suicide note. In her poem Plath is saying that she is tired of the life she has and the death is the only way so she can be free; "Her dead body wears the smile of accomplishment". For her the death is a goal which she must achieve. She must sacrifice herself so that others can live. In that poem the sense of death mirrors the two previous poems "You're" and "Morning Song". ...read more.

That shows that he is thinking of himself as Godlike because he was very attractive. Women were all over him all the time. But everything was too good to be true, "her laughs were an assassin's attempts". Hughes's and Plath's relationship was falling apart. It shows that too much love is not always the best as it can tear apart. In the poem Hughes also uses imagery such as metaphors, similes, zoomorphism and personification to create a very sexual image in the reader's mind, "Their little cries fluttered into the curtains". I do believe that the poems by Sylvia Plath are left as Plath's explanation of her suicide, because in the poems she is actually expressing her feelings and especially in the poem "Edge" which she wrote as her suicide note. The main ideas in her poems which I've looked at are birth and death. In the poems "Morning Song" and "You're" she expresses her feelings about the unborn baby and the hard life which most mothers have. In the poem "Edge" the main idea is death and that she is tired of the domestic life she has. Also some of the poems which Hughes has written relate to Plath, especially in the poem "Lovesong", where he reveals his feelings towards Plath because she has dominated his life just like the pike has, a symbolic "deep and vital life" as well as brutal violence. ?? ?? ?? ?? ...read more.