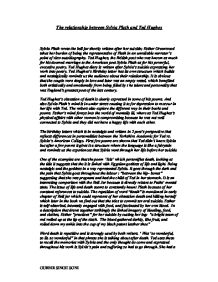 The relationship between Sylvia Plath and Ted Hughes

The relationship between Sylvia Plath and Ted Hughes Sylvia Plath wrote the bell jar shortly written after her suicide; Esther Greenwood takes her burden of being the representative of Plath in an unreliable narrator's point of view autobiography. Ted Hughes, the British poet who was known as much for his doomed marriage to the American poet Sylvia Plath as for his powerful, evocative poetry. Ted Hughes diary is written after Sylvia's suicide expressing her work into poetry. Ted Hughes's Birthday letter has its own structure which builds and nostalgically reminds us the audience about their relationship. It is obvious that the couple were deeply in love and later was an empty vessel, which benefited both artistically and emotionally from being filled by the talent and personality that was England's greatest poet of the last century. ...read more.

Being nostalgic and the goddess in a way represented Sylvia. It goes through the dark and the pain that Sylvia goes throughout the labour: "between the hip- bones" suggesting that she was pregnant and had the child of Ted in her stomach. It is an interesting comparison with the Bell Jar because it directly relates to Paths' mental state. The issue of life and death seems to constantly haunt Plath because of her constant references to suicide. The repetition of word "death" is mentioned in early chapter of Bell jar which could represent of her obsession death and killing herself which later in the book we find out that she tries to commit several suicide. Esther is self-absorbed, intensely engaged with food, and fascinated by her own blood. In a description that draws together strikingly the linked imagery of bleeding, food, and clothes, Esther "practices" for her suicide by cutting her leg: "a bright seam of red welled up at the lip of the slash. ...read more.

This tells her that the poem " The Montour", which again religious connation is possibly Greek mythology shows the relationship of Ted and Sylvia's were on low but he still stood by her and tells her to put her shoulder into her poems and they will be away. He wants her to concentrate on her written work rather than her worrying about father's death, which in this case she should take her mind away from ominous thoughts. A Pink Wool Knitted Dress seems to touch upon the idea of Hughes' resistance towards Plath' change in character. He mentions, "Before anything had smudged" which refers to her perfection before her life was overshadowed by death. He refers to heaven and uses 'flames' as a symbol of hell. He portrays death more realistically due to its spiritual connotation whilst Plath addresses it in a more na�ve manner. For example, she states "That morning I tried to kill myself." GURBIR SINGH SONI ...read more.