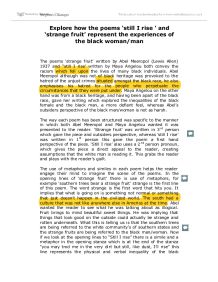 The poems Strange fruit written by Abel Meeropol (Lewis Allen) 1937 and Still I rise written by Maya Angelou both convey the racism which fell upon the lives of many black individuals.

Explore how the poems 'still I rise ' and 'strange fruit' represent the experiences of the black woman/man The poems 'strange fruit' written by Abel Meeropol (Lewis Allen) 1937 and "still I rise' written by Maya Angelou both convey the racism which fell upon the lives of many black individuals. Abel Meeropol although was not of black heritage was provoked to the hatred of the unjust crimes situated amongst the black race, he also emphasises his hatred for the people who perpetuate the circumstances that they were put under. Maya Angelou on the other hand was from a black heritage, and having been apart of the black race, gave her writing which explored the inequalities of the black female and the black man, a more defiant feel, whereas Abel's outsiders perspective of the black man/woman is not as harsh. The way each poem has been structured was specific to the manner in which both Abel Meeropol and Maya Angelou wanted it was presented to the reader. 'Strange fruit' was written in 3rd person which gave the piece and outsiders perspective, whereas 'still I rise' was written in 1st person this gave the poem a first hand perspective of the piece. ...read more.

The following line 'Black boy swingin' in the southern breeze' is in an almost casual tone, this purposely makes the image of murder shocking. The use of boy in this line, suggests the innocence and vulnerability of the black men/women, who faced the circumstances of that period in time. As we move on in both poems the choice of tone helps us the readers to thoroughly understand the mood and scene the black man/woman may have been in or faced. The next stanza of "still I rise" portrays the juxtaposition mentioned earlier. "Pastoral scene of the gallant south". The first line of this stanza uses the words "pastoral" and "gallant". Pastoral should convey a pleasant image of country life and its surroundings and gallant means courteous and brave, so the first line creates a pleasant scene for the reader; however this line is in direct contrast with the following line as the mood changes dramatically to show the complete opposite of mood "The bulging eyes and the twisted mouth". This change in mood is Abel trying to show the wrongness of the acts being practiced, it gives an image of going against the way of nature. ...read more.

On the other hand the last stanza, in "strange fruit" portrays the process of decaying implying a cycle of life. "Here is a fruit for the crows to pluck. For the rain to gather, for the wind to suck. For the sun to rot, for the tree to drop. Here is a strange and bitter crop" This final stanza shows the ignorance of the people who are leaving the acts that occurred to happen; in addition it suggests that the word rot metaphorically resembles the community. Maya Angelou's 'Still I Rise' reveals her relationship with history and the body's relationship with the earth. Having a black heritage, she knows the importance and cruel irony of history. She also correlates how the body can be put and driven into the ground, but eventually it decomposes and humans turn into earth, like soil and dust. Maya Angelou tells how she is above lies and oppression, and 'like dust, I'll rise.' She goes on to ask rhetorical questions to the reader. Her attitude as a confident, sassy, African American woman is out of the norm for society. Abel Meeropol's 'Strange Fruit' symbolizes disapproval and also homage to the black man/woman who were victims of hanging in the South. At the same time it represents the indecency of the practice, as an ironic, defiant, and bitter treatment. ?? ?? ?? ?? Stephen Olasupo ...read more.

This is a good attempt at analysing two poems and tackling a very broad subject.
Some very good and perceptive analysis of the language both poets use to convey their messages via the poems.
Some clunky expression.
Appropriate use of poetic terminology when discussing poems and shows understanding.
More detailed contextual detail would have been useful - the writer assumes knowledge.
Remains focused on the question throughout