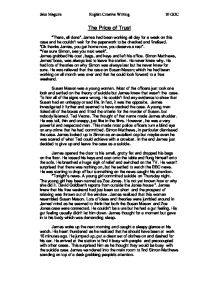 The Price of Trust (Creative Writing)Susan Mason was a young woman. Most of the officers just took one look and settled on the theory of suicide but James knew that wasnt the case. To him all of the signs were wrong.

The Price of Trust "There, all done". James had been working all day for a week on this case and he couldn't wait for the paperwork to be checked and finalised. "Ok thanks James, you get home now, you deserve a rest". "Yea sure Simon, see you next week". James grabbed his coat, bags, and keys and left his office. Simon Matthews, James' boss, was always last to leave the station. He never knew why. He had lots of theories on why Simon was always last but he never knew for sure. He was relieved that the case on Susan Mason; which he had been working on all month was over and that he could look forward to a free weekend. Susan Mason was a young woman. Most of the officers just took one look and settled on the theory of suicide but James knew that wasn't the case. To him all of the signs were wrong. He couldn't find any evidence to show that Susan had an unhappy or sad life. In fact, it was the opposite. James investigated it further and seemed to have cracked the case. A young man ticked all of the boxes and fitted the criteria for the murder of Susan. but nobody listened. Ted Vecna. The thought of that name made James shudder. He was tall, thin and creepy, just like in the films. However, he was a very powerful and respected man. This made most police officers turn a blind eye on any crime that he had committed. Simon Matthews, in particular dismissed the case. James looked up to Simon as an excellent cop but maybe even he was scared of what Ted could achieve with a crowbar. In the end James just decided to give up and leave the case as a suicide. James opened the door to his small, grotty flat and dropped his bags on the floor. ...read more.

He started to walk back into his office when he saw two officers holding a man. He knew that man too well. It was Ted Vecna, the man he suspected of killing Susan Mason. He saw both the officers take him inside the station. James dashed inside and asked one of the officers why they brought him in. He replied by explaining that he had beaten up 'sum old geezer' and had been taken into custody. James knew that this was a perfect opportunity to find out if Ted was the murderer of both the young girls. He scurried outside and got into his car. The loud engine roared around the car park as he thundered off up the road. As he drove he thought of a plan. If Ted's house was empty then maybe he could uncover something that could reveal him as a murderer. James knew that there was only one way to find out. He arrived at the house. It was different from the last time he saw it. Although it was still as impressive as he remembered. The lawn was recently mowed. The flowers were tropical and colourful and the house was gleaming and glossy. James drove the car round the side and got out. Fortunately he knew the house well and this would help snoop around the house. He walked up to the side door and thrust a small piece of wire into the lock. He moved from side to side and turned the knob repeatedly. It clicked and clanked but finally it opened. He stepped into the house. The house was clean and fresh. All of the appliances and furnishings were new and modern. He started to search anxiously for anything that could prove Ted was a murderer. He checked draws, cupboards, wardrobes, anything he could think of but he didn't find anything. It made him wonder if Ted was a suspect in either of the murders. ...read more.

"James! W...wha...what are you doing here. How did you get in"? "That doesn't matter. What does matter is that I'm arresting you both for the murder of both Susan Mason and Zoe Jones. "You can't prove anything. I'll arrest you for breaking and entering". Simon said with a hint of nervousness in his voice. "Well, would you be happy to explain this". James pulled out the bracelets. Simon looked shocked and he knew he was fighting a losing battle. "You do not have to say anything but it may harm your defence if-" James stopped as Ted dashed for the door. James knew he had only one option. He took a long, deep breath and pulled the trigger. The noise pierced the ever so quiet house and a loud scream of agony echoed around the room. James looked up to see Ted clutching his leg in pain. James felt quite bad. He knew it had to be done but firing a gun it something that you never get used to. Simon was on the floor scared and surprised at the incident at what just occurred. James knew he had won and that his gut feeling hadn't let him done. After James had radioed for backup the police had arrived and taken Simon away. Ted had been taken by ambulance and was escorted by two officers. He thought what sentence both of them would get. Life probably. He still couldn't believe that firstly, he didn't pick up on it and secondly why he did it. There were so many questions buzzing inside James' mind. Could he trust anyone in the force? Was everyone corrupt with Simon? He couldn't wait for questioning. There he would find all of the answers he was looking for. The thought of a good night sleep in his own bed made James smile. He was happy that he could finally put his mind at rest with this case and he thought that maybe, just maybe he could have a free weekend. By Jake Maguire ?? ?? ?? ?? Jake Maguire English Creative Writing 10 GOC ...read more.