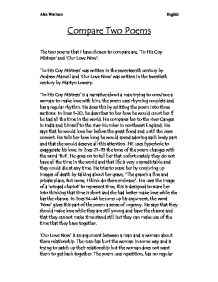 The two poems that I have chosen to compare are, 'To His Coy Mistress' and 'Our Love Now'.

Compare Two Poems The two poems that I have chosen to compare are, 'To His Coy Mistress' and 'Our Love Now'. 'To His Coy Mistress' was written in the seventeenth century by Andrew Marvell and 'Our Love Now' was written in the twentieth century by Martyn Lowery. 'To His Coy Mistress' is a narrative about a man trying to convince a woman to make love with him, the poem uses rhyming couplets and has a regular rhythm. He does this by splitting the poem into three sections. In lines 1-20, he describes to her how he would court her if he had all the time in the world. He compares her to the river Ganges in India and himself to the river Humber in northwest England. He says that he would love her before the great flood and until the Jews convert. ...read more.

In lines 34-46 he sums up his argument, the word 'Now' gives this part of the poem a sense of urgency. He says that they should make love while they are still young and have the chance and that they cannot make time stand still but they can make use of the time that they have together. 'Our Love Now' is an argument between a man and a woman about there relationship. The man has hurt the woman in some way and is trying to patch up their relationship but the woman does not want them to get back together. The poem uses repetition, has no regular rhyme and is free verse. The poem is set out like a conversation between two people, first the man argues that they can work things out but then the woman replies that they cannot. ...read more.

Even though these poems were written at very different times, they still have things in common. In both poems the man is trying to convince the woman of something, whether it be the make love with him or to carry on her relationship with him. In 'To His Coy Mistress' the man complements the woman and puts forward a well-constructed argument. In 'Our Love Now' the man compares different aspects of their relationship to different things. The main difference between the two poem is that I 'To His Coy Mistress' we do not find out the woman's reply to the argument but in 'Our Love Now' we find out that his argument is not successful and the woman ends her relationship with him. Alex Warham English ...read more.