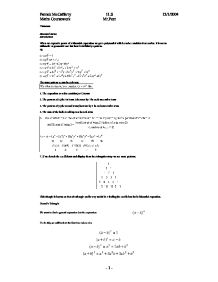 Theorem Binomial Series Introduction When we expand a power of a binomial expression we get a polynomial which can be considered as a series. It is not an arithmetic or geometric one but there is definitely a pattern. eg. The same pattern occurs in each row. 1. The expansion or series contains (n+1) terms 2. The powers of x (the 1st term ) decrease by 1 in each successive term 3. The powers of y (the second term) increase by 1 in each successive term 4. The sum of the indices add up to n in each term 7. If we detach the coefficients and display them in a triangular array we see more patterns. This triangle is known as Pascal's triangle and is very useful for finding the coefficient in the binomial expansion. Pascal's Triangle We want to find a general expansion for the expression To do this, we will look at the first few values of n There are 2 things to notice about the expansions: 1 If you add the power of a and b in each term of an expansion, you always get n. This is because the expansion is really formed by multiplying n brackets together, so each term is made by taking 1 term from each bracket. ...read more.

You may be asked to find all the terms up to a certain power of x. You must be quite sure that you have fulfilled the requirement before you stop. Find, up to the power of x3, the expansion of Obviously any further terms would be above x3. You will need to be a bit more careful if powers or fractions are included in the brackets. Expand, up to powers of x5 The last term is too high for our range. So the answer to the question is One application of the binomial theorem is easily approximating expressions like (0.98)10, which will be demonstrated on the next page. The Binomial Theorem for positive, integral n Example 1 What are the first 5 terms in the expansion of We can use this expansion to make a quick approximation of (0.98)10. If we say that then All the x terms are doing are moving the decimal points in the terms, so the sum is a very easy one. The calculator result is so you can see that the expansion, only up to 5 terms, has given an answer, correct to 5 d.p. Example 2 Find, to 3 d.p., the value of (1.03)7. We want to expand If we say that then So to 3 d.p. The calculated value is Patrick McCafferty 11.S 12/1/2004 Maths Coursework Mr.Peet - 1 - ...read more.