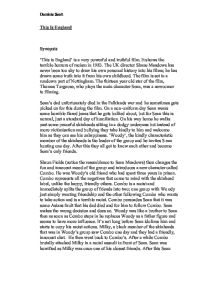 This is England - review

This Is England Synopsis 'This is England' is a very powerful and truthful film. It shows the terrible horrors of r****m in 1983. The UK director Shane Meadows has never been too shy to draw his own personal history into his films; he has drawn some truth into it from his own childhood. The film is set in a rundown part of Nottingham. The thirteen year old star of the film, Thomas Turgoose, who plays the main character Sean, was a newcomer to filming. Sean's dad unfortunately died in the Falklands war and he sometimes gets picked on for this during the film. On a non-uniform day Sean wears some horrible flared jeans that he gets bullied about, but for Sean this is normal, just a standard day of humiliation. On his way home he walks past some peaceful skinheads sitting in a dodgy underpass but instead of more victimisation and bullying they take kindly to him and welcome him as they can see his unhappiness. 'Woody', the kindly characteristic member of the skinheads is the leader of the group and he invites Sean hunting one day. After this they all get to know each other and become Sean's only friends. Shaun Fields (notice the resemblance to Sean Meadows) then changes the fun and innocent mood of the group and introduces a new character called Combo. ...read more.

This is then followed by a clip showing the Nightrider car called Kit, this was supposed to be the car of the future! The credits also come back on. Until now each cut is synchronised with the music. This then changes and shows a clip of a rough, graffiti covered, scruffy council estate. The clip stays on for longer than the previous ones and seems to have been filmed from a moving vehicle. The title "This is England" then appears with the council estate as background. It then changes onto a different clip, this time not synchronised with the music. This shows older school boys, in uniform, all with skinheads climbing concrete stairs, again covered with graffiti as the name of the main character, Thomas Turgoose appears. The next clip shows typical eighties clothes and dancing and shots of a well known group of the time, Duran Duran with more credits appearing against the background. There are shots of an audience, which looks like rowdy men at a gig. It then changes to teenagers kissing which then leads to film of the wedding of Princess Diana and Prince Charles and a lot of national happiness, the crowds waving Union Jacks in celebration. Following clips show a series of events that took place in the eighties- a block of flats being demolished, a train crashing, an armed man on a balcony as a b**b goes off; the ...read more.

It shows that they do have deeper and better feelings than is normally credited with their image. I find the banter between the skinheads comical despite the realistic use of foul language. I also find the relationship between Sean and Woody at the start very sweet as he acts like an older brother to Sean. Towards the middle/end of the film I start to get a negative feeling because of the way Combo takes over the friendly group and changes the whole atmosphere causing tension and resulting in a very violent ending. Personal Response. I think 'This is England' is a very truthful film. It's a film that shows how unexpected friendships and relationships can be made. There are both good and bad influences, for example, Woody is a good influence because he is a friendly, upbeat character and likes to have fun where as Combo brings his racial hatreds and prejudices causing tension between the group. The r****m in the film is horrific; it makes you feel sick. I was upset by it and I know other people got upset about it because when I watched the film one of my class mates was crying. It affected her so deeply. Films like this need to be made to make you realise how bad r****m can get. The title of the film implies that England is a r****t country when I sincerely hope that is not true. ?? ?? ?? ?? Dominic Scott ...read more.