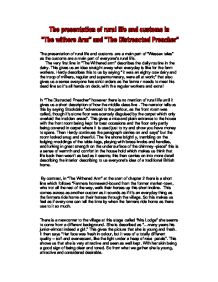 The presentation of rural life and customs are a main part of "Wessex tales" as the customs are a main part of everyone's rural life. The very first line in "The Withered arm" describes the daily routine in the dairy. This gives us an idea straight away what everyday is like for the farm workers. Hardy describes this to us by saying " it was an eighty cow dairy and the troop of milkers, regular and supernumerary, were all at work;" that also gives us a sense everyone has strict orders as the farmer needs to meet his dead line so it's all hands on deck, with the regular workers and extra! In "The Distracted Preacher" however there is no mention of rural life until it gives us a short description of how the middle class live. The narrator tells us this by saying Stockdale "advanced to the parlour, as the front room was called, though it's stone floor was scarcely disguised by the carpet which only overlaid the trodden areas". ...read more.

This comes across as another custom as it sounds as if it's an everyday thing as the farmers ride home on their horses through the village. So this makes us feel as if every one can tell the time by when the farmers ride home as there use to it so much. There is a newcomer to the village at this stage called "Mrs Lodge" she seems to come from a different background. She is described as "...many years his junior-almost indeed a girl." This gives the picture that she is young and fresh. It then says "Her face was fresh in colour, but it was of a totally different quality - soft and evanescent, like the light under a heap of rose petals". This shows us that she is very attractive and seen as well kept. With her skin being a good sign of being clear and toned. So from what we gather she is young, attractive and considered desirable. ...read more.

To the boy and his mother Mrs Lodge is considered to be "A lady complete." And her "ways be quite a woman's" also "her face as comely as a live doll's" this appearance is seen as very beautiful and to be classed as a real woman. Also further on in "The Withered Arm" at the start of chapter 6 when Mrs Lodges arm has taken a turn for the worst. she says" nay, bunches of mystic herbs, charms, and books of necromancy, which in her schoolgirl time she would have ridiculed as folly." This shows us that her back ground has different traditions in life as they do not believe in curses, cures and medicines. But now she is in the country everyone else is trying to give her there formula and remedies but she doesn't believe in such things so carries on with how she was taught. This shows the contrast between rural and urban education back then, as in urban education they were taught that remedies and cures do and mean nothing where as in rural education that is what they believe in and reckon work. ...read more.