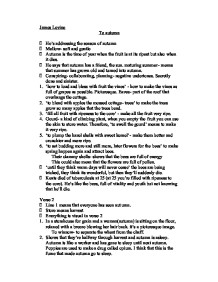 James Levine To autumn * He's addressing the season of autumn * Mellow- soft and gentle * Autumn is the time of year when the fruit is at its ripest but also when it dies. * He says that autumn has a friend, the sun. maturing summer- means that summer has grown old and turned into autumn. * Conspiring- collaborating, planning- negative undertones. Secretly done and sinister. 1. 'how to load and bless with fruit the vines' - how to make the vines as full of grapes as possible. Picturesque. Eaves- part of the roof that overhangs the cottage. 2. 'to blend with apples the mossed cottage- trees' to make the trees grow so many apples that the trees bend. 3. 'fill all fruit with ripeness to the core' - make all the fruit very ripe. 4. Gourd- a kind of climbing plant, when you empty the fruit you can use the skin to store water. Therefore, 'to swell the gourd' means to make it very ripe. ...read more.

it's a picturesque image. To winnow- to separate the wheat from the chaff. 2. Shows that they're halfway through harvest and autumn is asleep. Autumn is like a worker and has gone to sleep until next autumn. Poppies are used to make a drug called opium. I think that this is the fume that made autumn go to sleep. 3. Gleaner- takes the scraps of the harvest. A woman is walking with a basket of scraps on her head walking across a brook (small stream). Again a picturesque and relaxing image. 4. She's pressing apples to make cider and she's working again. Spending hours as it takes a long time to get the juice out of the apples (oozing hours and hours). * Autumn is always showed as a woman in all these images. * She's always just finishing working just like harvest is just finishing in the poem. ...read more.

Winter (death) is just around the corner. Conclusion * This poem was the last major poem Keats wrote, it was written in 1819 and he died two years later from tuberculosis. * Keats probably got tuberculosis from his brother Tom. * One of his parents died of tuberculosis * Keats trained as a doctor during the early years of his life. * Its likely he knew that he was going to die. How is the poem like Keat's life? * Its an idea of the cruelty of nature * He was 'full of ripeness to the core' when he died. * Shows images of death and how some of the animals didn't know they would die. (bees and lambs). Words related to death in the 3rd verse of the poem * Soft-dying * Whaleful * Mourn * Sallows * Dies Why its to do with Keats life * It shows anger which relates to his anger that he has the disease. * Its philosophical. Everything he says in the poem relates to what's happening to him in real life. ?? ?? ?? ?? ...read more.