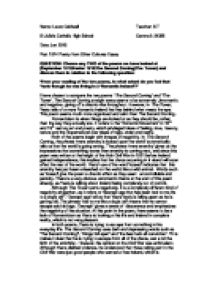 To what extent do you think that Yeats thought he was living in a 'Romantic Ireland'?

Name: Laura Caldwell Teacher: S.T St Julie's Catholic High School Centre #: 34358 Date: Jun 2010 Post 1914 Poetry from Other Cultures Essay QUESTION: Choose any TWO of the poems we have looked at (September 1913/Easter 1916/The Second Coming/The Tower) and discuss them in relation to the following question: 'From your reading of the two poems, to what extent do you feel that Yeats though he was living in a 'Romantic Ireland'?' I have chosen to compare the two poems 'The Second Coming' and 'The Tower'. The Second Coming straight away seems to be extremely Unromantic and negative, giving off a chaotic vibe throughout. However, in The Tower, Yeats tells of a more Romantic Ireland that lies behind what meets the eye. This poem seems much more organised and calm than The Second Coming. Romanticism is when things are looked at as they should be, rather than the way they actually are. It refers to the 'Romantic Movement' in 18th and 19th century art and poetry, which privileged ideas of feeling, love, beauty, nature and the Supernatural over ideas of logic, order and reality. Both of the poems begin with images of negativity. In The Second Coming, the phrase 'mere anarchy is loosed upon the world' automatically tells us that the world is going wrong. The phrase 'mere anarchy' gives us the impressions that something worse than anarchy is coming next, and since this poem was written at the height of the Irish Civil War in 1921 before Ireland gained independence, this implies that the chaos occurring in Ireland will soon affect the rest of the world. ...read more.

It is negative because it symbolises chaos, using the word 'desert' to symbolise that there is vastness of nothing. The phrase 'the falcon cannot hear the falconer' is also used, which again symbolises chaos in the fact that if it cannot hear the falconer, then it is out of control and anything could happen to it. This is exactly what Yeats believes is happening to the world. The Second Coming only contains unromantic imagery because it is a very gloomy poem. The Tower on the other hand, contains much more positive imagery. The stanza - 'As at the loophole there, The daws chatter and scream, And drop twigs layer upon layer. When they have mounted up, The mother bird will rest, On their hollow top, And so warm her wild nest' is another example of bird imagery, and means that any young people reading the poem will use Yeats' advice and mistakes and learn from them, so they can actually do something to make a better world. After a sense of melancholy earlier on in the poem, we can now see Yeats' positivity coming out, as he would like to encourage others to go out and be active like he should have been. He also makes a reference to the sun and moonlight being 'one inextricable beam', which symbolise that they can't be separated, and since the sun represents logic and the moon represents imagination, he is saying that everyone should have both of these traits. He talks about the 'moon and sun and star'. ...read more.

These rules are an explanation of the spiritus mundi. They mean that our mind consists of the memories of the deceased, which are formed together into one 'simple' mind. This mind is a memory of nature, and can only be communicated with through symbolic messages. Yeats' prose writings give a clearer outlook on his poems, as they give insight into his beliefs and methods. From this, we get an idea that Yeats is not simply trying to convince himself that Ireland is Romantic, but that he does actually see it that way through the Spiritus Mundi. Because they are deceased and they all have old memories, these are the memories he is living within so that is how he sees Ireland. Overall, I do not think that Yeats thought he was living in a Romantic Ireland at all. Although he often Romanticises things in these two poems, he outweighs the Romance with many unromantic images and often relates back to the reality of the chaotic and industrialised Ireland of his lifetime. He does, however, often refer to the Romantic Ireland of the past where the heroes fought for all they believed in, and people worked in the fields instead of in dreary modern offices and factories. He talks of folklore and tales of the past in The Tower. It is quite clear that he would like to be in this alternative Ireland, and often pretends that he is, but he does actually know that he is living in the dreary contemporary Ireland that he is in. His attempts to escape into the Spiritus Mundi relieve the despair of his surroundings, but the reality of the violence and nobody doing anything about it is very clear from his poems. ...read more.