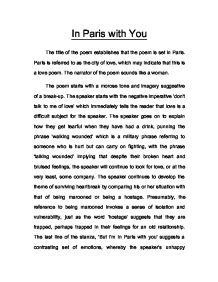 In Paris With You. Paris is referred to as the city of love, which may indicate that this is a love poem. The narrator of the poem sounds like a woman.

In Paris with You The title of the poem establishes that the poem is set in Paris. Paris is referred to as the city of love, which may indicate that this is a love poem. The narrator of the poem sounds like a woman. The poem starts with a morose tone and imagery suggestive of a break-up. The speaker starts with the negative imperative 'don't talk to me of love' which immediately tells the reader that love is a difficult subject for the speaker. The speaker goes on to explain how they get tearful when they have had a drink, punning the phrase 'walking wounded' which is a military phrase referring to someone who is hurt but can carry on fighting, with the phrase 'talking wounded' implying that despite their broken heart and bruised feelings, the speaker will continue to look for love, or at the very least, some company. ...read more.

We learn that they could be on the rebound, which means that having had their heart broken they have stumbled into a new relationship very quickly not because they are in love but that they are unhappy and want some tender loving care. The poet plays with the notion of rebounding off one relationship and into another by rhyming the words 'rebound' and 'bound', both notably at the end of consecutive lines (end rhyme), which suggests that the speaker doesn't care where the new relationship is going (where it is bound). The use of end rhyme adds a satisfying abruptness to the idea of stumbling into a new relationship without caring where it is going. The stanza ends with the refrain 'I'm in Paris with you' only this time omitting 'but' which gives the line a slightly more positive tone. The third stanza is very interesting. ...read more.

The horrible hotel could be reflecting their relationship. The crack in the ceiling could be their relationship breaking and the little bit of Paris in their view could be the tiny bit of hope they have left. The final stanza brings all these competing emotions together in a game of word play and imagery. The speaker could be said to be swapping the word 'love' for the word 'Paris' as in 'I'm in Paris [love] with your eyes', which could suggest that he or she is uncomfortable saying the word 'love' or equally that due to the power and beauty of Paris the comparison is a huge compliment. If the poet is using metonymy (swapping closely associated words for effect Paris/Love) it could be to emphasise the growing love between the lovers or to highlight the awkward tension between them. The poem ends with the refrain 'I'm in Paris with you' which is a complete declarative statement which gives the poem a sense of closure, but doesn't really answer all the questions. ...read more.