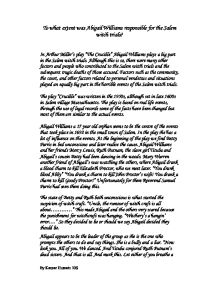 To what extent was Abigail Williams responsible for the Salem witch trials? In Arthur Miller's play &quot;The Crucible&quot;.

To what extent was Abigail Williams responsible for the Salem witch trials? In Arthur Miller's play "The Crucible" Abigail Williams plays a big part in the Salem witch trials. Although this is so, there were many other factors and people who contributed to the Salem witch trials and the subsequent tragic deaths of those accused. Factors such as the community, the court, and other factors related to personal vendettas and situations played an equally big part in the horrible events of the Salem witch trials. The play "Crucible" was written in the 1950s, although set in late 1600s in Salem village Massachusetts. The play is based on real life events, through the use of legal records some of the facts have been changed but most of them are similar to the actual events. Abigail Williams a 17 year old orphan seems to be the centre of the events that took place in 1692 in the small town of Salem. In the play she has a lot of influence on the events. At the beginning of the play we find Betty Parris in bed unconscious and later realise the cause. Abigail Williams and her friends Mercy Lewis, Ruth Putnam, the slave girl Tituba and Abigail's cousin Betty had been dancing in the woods. Mary Warren another friend of Abigail's was watching the others, where Abigail drank a blood charm to kill Elizabeth Proctor, who we meet later. "You drank blood Abby" "You drank a charm to kill John Proctor's wife! You drank a charm to kill Goody Proctor!" ...read more.

When Abigail is asked, she denies it and puts on such a performance that Mary takes her confession back and goes as far as to say "Abby, Abby, I'll never hurt you more!" But we can't hold Abigail Williams entirely responsible for her actions, as we find that Abigail had, had a dreadful childhood. She saw her parents being murdered in front of her. "I saw Indians smash my dear parents' heads on the pillow next to mine...." So her being an orphan, it couldn't have been easy to live without her parents since childhood, not only that the girl had seen her parents being murdered which as we all know can be traumatising for the best of us, let alone a child. Having Parris as a guardian couldn't have helped things either. So from these facts we can gather that Abigail wasn't a normal person like you and me but may well have been psychotic. We also know that she had been seduced by a 35 year old, married man, John Proctor. We know she had fallen in love with him. Some of the things she does it out of her love for John Proctor "I look for John Proctor that took me from my sleep and put and put knowledge in my heart!" like accusing Elizabeth Proctor, although extreme, but out of love. The lies she tells, about her dancing and doing nothing else, were lies to save her self from being hanged. She did not want to die and so for that reason she lied. ...read more.

We know there were other factors and people who supported and played a big part in the trials. We also know that a lot of it was to settle old grudges and to deal with individuals personal vendettas. Still we cannot deny the fact that Abigail was the main reason for these witch trials. The drinking of the blood charm and dancing and heaven knows what else and then being discovered started the talk of witchcraft and after that, one after the other, the drastic events of the Salem witch trials unfolded. In my opinion I feel that Abigail was to blame somewhat although I would not blame her entirely. Living in a strict community and having seen terrible things happen in front of her as a child could definitely not have helped her behaviour and mentality. I myself would also hold responsible the court and people like the Putnam's and the Walcott's and also Parris, to some extent, for the trials. Not really for being a cause for starting them as such, although I do think they played some part, but mainly for contributing to them after they had started. As for Abigail, her behaviour cannot be excused, yet we can try and understand why she did what she did. We know that a lot of it had to do with her obsession with Proctor but if we were to look just beneath the surface we would find that, at least in my opinion, that Abigail was somewhat mentally psychotic in some ways and really needed a good and loving home to support her after the murder of her parents to have prevented her from her terrible deeds. By Kausar Hussain 10S ...read more.