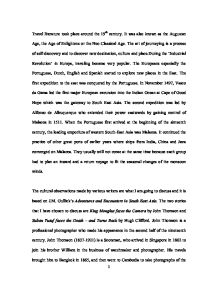 Travel literature took place around the 19th century. It was also known as the Augustan Age, the Age of Enlightens or the Neo Classical Age. The art of journeying is a process of self-discovery and to discover new destination, culture and place.During the 'Industrial Revolution' in Europe, traveling became very popular. The Europeans especially the Portuguese, Dutch, English and Spanish started to explore new places in the East. The first expedition to the east was conquered by the Portuguese. In November 1497, Vasco da Gama led the first major European excursion into the Indian Ocean at Cape of Good Hope which was the gateway to South East Asia. The second expedition was led by Alfonso de Albuquerque who extended their power eastwards by gaining control of Malacca in 1511. When the Portuguese first arrived at the beginning of the sixteenth century, the leading emporium of western South-East Asia was Malacca. It continued the practice of other great ports of earlier years where ships from India, China and Java converged on Malacca. They usually will not come at the same time because each group had to plan an inward and a return voyage to fit the seasonal changes of the monsoon winds. The cultural observations made by various writers are what I am going to discuss and it is based on J.M. Gullick's Adventures and Encounters in South East Asia. The two stories that I have chosen to discuss are King Mongkut faces the Camera by John Thomson and Sultan Yusuf faces the Death - and Turns Back by Hugh Clifford. John Thomson is a professional photographer who made his appearance in the second half of the nineteenth century. John Thomson (1837-1921) is a Scotsman, who arrived in Singapore in 1862 to join his brother William in the business of watchmaker and photographer. His travels brought him to Bangkok in 1865, and then went to Cambodia to take photographs of the ruins of Angkor Watt. ...read more.

According to him, it losses its value and draws the contras. He like the Siamese ladies to be Siam and not to mimicry the foreigners. The Siamese women dressed in western style create a hybrid image. It does not portray their culture and belongings. Therefore, the both examples that were mentioned above, Thomson has given a fair judgment and how it reflects a negative view on the Thai culture. The hair cutting ceremony or also known as coming to age ceremony is also an official ceremony carried out to the young Prince who has come to the throne. It is also known as the Tonsure or So-Kan Festival. "I afterwards attended the great Tonsure Festival, or So-Kan, as the Siamese call it, when the heir-apparent, Prince Chowfa Chul-along-korn, who has since come to the throne, was deprived of the pride, pomp and circumstance of a sacred Brahminical rite."10 Thomson describes every procedure in full detail and in each he gives a full description of what was going on. He also gives a very positive and objective view of the local custom and culture which was carried out. "Within the grounds of the first king's place, there is a large paved quadrangle ........known as mount Khrai-lat, and bearing a tiny shrine upon its summit.........young Prince thrice around the sacred mount khrai-lat. Later two ladies, who was waiting below.........bathe his feet in a silver urn. Thence he betakes himself to a temple hard by, where the top-knot is solemnly removed."11 Thomson gives a full description of the entire ceremony from the beginning to the end. He even commons by saying "The entire ceremony is long and tedious" and "I was the only European who witnessed this important part of the Brahminical ceremony."12 In his observations on the hair cutting ceremony, Thomson has not only given a very lengthy description of the ceremony and its importance but also marks his present as a very important one. ...read more.

Like wise in Siam, it is also a part of the Malay tradition to chew betel-nuts. From the above description, we can say that Clifford has observed very closely of the Malay culture and give an objective view of their practice and living style. As a result, the cultural observation done by John Thomson on "King Mongkut faces the Camera" and Hugh Clifford's "Sultan Yusuf Faces the death - and Turns Back" has come out with their own perception and view. John Thomson gives his fair judgment in the things he agrees and eventually disagrees when he finds something that is contrast or that is unacceptable. For example he admires King Mongkut and the way he was dressed. "I must confess that I felt much impressed by his appearance, as I had never been in the presence of an anointed sovereign before........ His dress was a robe of spotless white;.........I was admiring the simplicity and purity of this attire."21 Thomson being very frank by saying how he feels about certain things. In another example, when he finds the women are mimicry the western ladies, he gives a negative point of view. "The imitations of English ladies were particularly ludicrous."22 Through out Thomson's observation in Siam is based on his 'Home Culture' and therefore he agrees to certain accepts and disagrees in others. Where else in the Hugh Clifford's passage called "Sultan Yusuf faces the death - and Turns Back", he has given a full description of his personal observation only. Hugh Clifford did not make any commandments or give his personal opinion on his observation. His observations are mainly of what he sees. He gave two different account on the situation the leave it to the readers to judge and make their own stand between the death of the Sultan. " The Europeans doctors explained that the growth of the tumor on the King's brain had been suddenly arrested and the case was quoted as one of the unparallel interest but the Malays say that the King went near to lose his life at the hands of Megat Pendia's Familiar". ...read more.