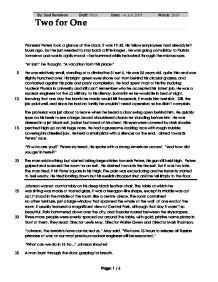 Two for One - imaginative writing

Professor Peters took a glance at the clock. It was 19:43. His fellow employees had already left hours ago, but he just needed to stay back a little longer. He was going on holiday to Florida tomorrow and was in a jolly mood - he hummed while he looked through the microscope. "At last!" he thought. "A vacation from this place!" He was relatively small, standing at a diminutive 5 feet 6. He was 56 years old, quite thin and was slightly hunched over. His bright green eyes shone out from behind his circular glasses, and contrasted against his pale and pasty complexion. He had spent most of his life studying Nuclear Physics in University and still can't remember why he accepted his latest job. He was a nuclear engineer for the US Military, to his dismay. Sometimes he would lie in bed at night, knowing that one day the bomb he made would kill thousands. It made him feel sick. Still, the job paid well, and since he had no family he wouldn't need a pension; so he didn't complain. The professor was just about to leave when he heard a door swing open behind him. He quickly spun on his heels to see a large, broad-shouldered character standing before him. He was dressed in a jet black suit, jacket buttoned at his chest. His eyes were covered by dark shades perched high up on his huge nose. He had a gruesome-looking face with rough stubble covering his chiselled jaw. He held a small pistol with a silencer on the end, aimed towards Peters' face. "W-w-ho are you?" Peters stuttered. He spoke with a strong American accent. "And how did you get in here?!" ...read more.

The first to enter the helicopter was John. He was the leader of the FBI agents and his appearance reflected his role. He looked extremely athletic; his huge muscles stretched the fibres of his clothes to their limits. He stood at a height of 6 foot 2. A small boom microphone was swung down the side of his face and hovered before his colourless lips. He never smiled; he was a very serious man with a lack of humour. He didn't trust anyone either. His uniform looked like it had passed its expiry date. Threads hung loose from the arms and legs, and holes were present too. Next to follow was Agent Green. He was slightly smaller than John, but no less well built. His head seemed miniscule in comparison to his enormous, broad shoulders. His sparkling, pale blue eyes had seen lots and remembered even more. Two pistols were strapped to each leg, along with a knife on his right, his more powerful side. Once he had been standing near a grenade when it exploded - shrapnel had cut his face, narrowly missing his eyes. Scars run across his face, the most prominent stretching from his ear right down to his lips; it looked like he had tried shaving with a cheese grater. The last soldier to enter was Agent Smith. He was very young: in his early 30's. He had a very short temper, not a very desirable thing to have in the FBI. If you lose control, you're very likely to be careless and die - it's a miracle he's still alive. He went to the gym daily, and it showed. He was a little less built that the leader, but it was negligible. ...read more.

"Gimme a moment while I hotwire it..." Green said, trying to keep calm. A horde of soldiers burst out of the door that they had just came out of. John pulled out his gun and pressed the trigger. The gun did nothing but click. It was jammed! He cursed and pulled out both of his pistol and started firing alternate shots in to the mass of soldiers a few hundred metres away. They were getting closer, and closer, and closer, firing all the time. Their shots smashed the windows and deflected off the armoured exterior of the car. Then the engine started, but the car didn't move anywhere. John turned to Green. Blood was splattered over the window. A bullet had passed straight through his head just as he had finished hotwiring it. John had no time to mourn; he simply opened the driver door, pushed him out, swapped seats and slammed on the accelerator. The car sped away out of the dock. He ducked as the final bullets hit the car. As they were escaping, Marine helicopters flew overhead towards the direction of the dock and John let out a sigh of relief. He jumped out of the car and waved his arms at them. One of them landed close by and a man ran out of the rear and towards the car. It was Director Owen. "Time to come home, son. Good job," He looked past John and into the car, saw that the Professor was there, then asked anxiously, "Where's Smith and Green?" John bowed his head, holding back his tears and simply mumbled, "Dead." He looked behind him, at Peters, and spat out the words, "You'd better not have said anything about the nukes!" ?? ?? ?? ?? By: Saul Rennison Draft: Final Date: 14 July 2009 Words: 2969 Two for One Page: 1 / 6 ...read more.